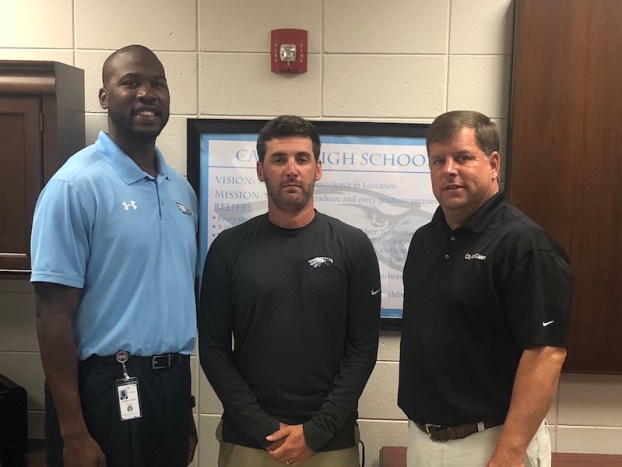 CALERA – A former county coach of the year will be taking over as the new head football coach at Calera High School after former head coach Andrew Zow departed for Bessemer City earlier in June.

Trey Simpson, who previously served as the team’s defensive coordinator, was promoted to the position after an announcement was made by Calera on Friday, June 28.

“I would like to start by saying how thankful and truly blessed I feel for having the opportunity to work in this great community,” Simpson said. “I’m extremely excited about the upcoming season and the challenges that we have ahead of us.  Our athletes have worked very hard in preparation for this season and we look forward to consistently competing at a high level.”

While Simpson hasn’t been a head football coach in the county, he has experience leading a team as both the head baseball coach of Montevallo and Calera.

At Montevallo, where he also coached under Zow on the football team, Simpson was named the Shelby County Baseball Coach of the Year in 2012 after leading the Bulldogs to the semifinals of the Class 3A playoffs.

When Zow moved to Calera to take over that job, Simpson came with him and eventually became the Eagles’ head baseball coach for the 2017 and 2018 seasons.

In 2017, he led Calera to a 24-14 overall record and a berth in the second round of the Class 5A playoffs, before then leading the Eagles to a 26-9 record in 2018 with a berth in the quarterfinals of the playoffs before losing a heartbreaking 6-5 game to St. Paul’s to prevent a trip to the semifinals.

While Simpson hasn’t led the football team yet, he’s proven he knows how to manage a roster and a team with that kind of success, and with a lot of talent still remaining at Calera this year, he’ll have a chance to jump in and make an immediate impact.

“We have an extremely talented group of young men representing our community on and off the field,” he said. “We look forward to watching them reach their full potential. We are fortunate to have top notch facilities and look to put a top notch product on the field.”

Last year, the product wasn’t what Calera had hoped for with several issues highlighted by the jump up to Class 6A leading to a 1-9 overall record.

But in his first year at the helm, Simpson is hoping to get guys bought into him and what they need to do to be a successful team at the highest level.

“Calera High School football seeks to provide our student athletes with an understanding of the importance that hard work, dedication, mental toughness, intentionality, goal setting, character, preparation, and attitude directly impacts their success in the classroom as well as on the football field,” he said. “These skills will help our student athletes accomplish goals far beyond high school. It’s crucial that our kids learn how to overcome obstacles and deal with adversity for our program and their futures.

“Student athletes are students first, so they are expected to treat teachers and peers with the utmost respect while maintaining a grade point average that they are capable of. We set high expectations for our players because we believe that these expectations result in our kids striving and achieving their goals.”

Simpson will have some strong athletes back this season, but helping them grow as men off the field is what he’s hoping will help them grow together on the field.

With that mentality and the desire to want to be better than last year’s team that scored just 14.7 points per game and gave up 31.4 points per game, should give the Eagles plenty of fuel heading into the 2019 football season.

It’s an opportunity Simpson looks forward to and one he is extremely thankful for.

“I would personally like to thank Mayor Jon Graham, the City of Calera, Calera Parks and Recreation, Calera Football Boosters, administrators, Calera High School faculty, The Shelby County Board of Education, the coaching staff, parents, cheerleaders and the coaches wives for the outstanding support of our program,” Simpson said. “It takes a community effort to reach the goals that we have set, and our support has been second to none. Your dedication to the success of our program is noticed and deeply appreciated. You have put our coaches in a situation that allows them to focus on coaching and most importantly building positive relationships with our student athletes.”

By ALEC ETHEREDGE | Sports Editor PELHAM – You may know him as the guy who stomps a lot during... read more