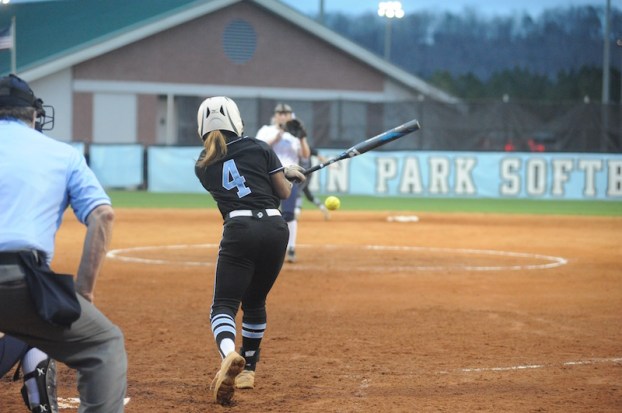 Spain Park’s Lydia Coleman, above, was named to the 2019 NFCA All-Region South Team along with Annabelle Widra and Maddie Majors. (Reporter photo/Alec Etheredge)

After spectacular seasons for the Jaguars, Annabelle Widra, Maddie Majors and Lydia Coleman were all named to the All-Region South Team.

In the South Region, Spain Park tied with two other schools for the most players named to the All-Region team from the same school. Their three players equaled the total of both Keller (Texas) High School and North Davidson (Kentucky) High School.

Out of five different regions and 160 athletes, no team had more than five players named to any specific All-Region team, making Spain Park one of just nine schools to have at least three players earn a spot.

These awards honor softball student-athletes from the Association’s five regions with first- and second-team recognitions. NFCA member coaches from each region’s respective committees selected the honorees, and recipients are now eligible for the 2019 NFCA High School All-America squads.

Widra’s 2019 season was one of the best in the state this year both pitching and hitting, which earned her a spot on the All-County and All-State teams, while also being named the county’s Pitcher of the Year and a MaxPreps All-American.

After bettering her ERA this season, and picking up just one less victory and 27 less strikeouts in 29 less innings pitched, Widra brought her career strikeout total to 772 with two more years of pitching left. She has thrown for at least 237 strikeouts in all three years as a starting pitcher, throwing 272 in eighth grade and 264 last season, and now has 890 total since starting her seventh grade year.

Majors has been one of the best players in the state for several years, and she closed out her career in dominant fashion. Her senior season featured an average of .448, while finishing fourth in the county with 65 hits and second in the county with 69 RBIs. She picked up 36 runs scored, 14 doubles and 10 home runs.

Widra and Coleman will both be back as juniors in 2019, while Majors has graduated after a stellar career.

By GRAHAM BROOKS / Staff Writer HELENA – The theme “good habits” was a two-word motto used the week of... read more