CALERA —  Following a medical screening at Calera High School in December 2018, Zach Atchinson was diagnosed with Adolescent Idiopathic Scoliosis, a type of scoliosis that appears in the late childhood and early adolescent years of one’s life. Now Atchinson is raising money through GoFundMe to help costs associated with a life-changing surgery. 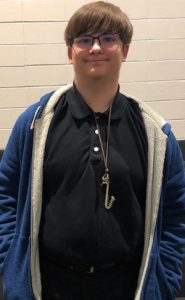 Zach explained he had noticed some mild pain around the time of the diagnosis but nothing that would have made him aware that he would have the condition. When he was diagnosed, he said he attempted to explore treatment options but was told that because of his age and the curvature of his spine his options were limited.

However his mother, Amy Atchinson, was not satisfied with this conclusion. After reaching out to support groups she learned that there were in fact other treatments that could help her son.

“One of the people from the groups told me we needed to look into VBT, or Vertebral Body Tethering or ASC, or Anterior Scoliosis Correction,” she said. “We found a physician in Missouri that we visited on the last two days of school. He said that Zach definitely needed surgery.”

Zach was eventually referred to a doctor in New York who approved him to have the ASC procedure. This procedure involves inserting a titanium screw in the vertebrae affected by scoliosis and a flexible cord is attached and used to straighten out the spine. The recovery time for this procedure is roughly two weeks.

This procedure will allow Zach, who is currently wearing a back brace, to maintain flexibility and movement in each vertebra in his spine. A third surgical option, spinal fusion, would greatly reduce movement of the spine.

“As his parents, we refuse to tell Zach this is the only option,” Amy wrote on the GoFundMe page. “He has so many plans and dreams for his life, and wants to maintain his flexibility as long as possible.”

Amy explained that while the procedure itself is covered by their insurance, the cost of travel to New York, lodging while other non-covered medical expenses are not. This is why she started the GoFundMe campaign.

“It’s very kind,” said Zach about the donations. “I did not expect so many people to donate. It’s a nice surprise to see all these people want to help.”

Amy also wants to raise awareness of scoliosis. The earlier a child is diagnosed, the more options he or she has. The VBT surgery, for example, is typically done on immature spines of children under the age of 14.

Zach now has a date for his surgery, July 10, and explained that he is not nervous about the surgery, that he “just wants to be out of pain.”

“As his parents, it has been difficult to watch him go through this but we are confident that this route is the best one for us to take,” Amy wrote on the GoFund Me page. “We have spoken to him often about his options and he is the driving force behind the decisions we have made.”

The fundraiser for the family’s expenses can be found on their GoFundMe page. It can be found by searching “Let’s Back Zach” at Gofundme.com.

Scoliosis is a medical condition defined by the “abnormal lateral curvature of the spine,” according to the American Association of Neurological Surgeons.

The AANS estimates that 2-3 percent of the world’s population is affected by scoliosis in some way, with six to nine million affected individuals in the United States alone. The condition is most often diagnosed in childhood and adolescence, and onset usually occurs between ages 10-15.

There are three types of scoliosis separated by their underlying causes: idiopathic, congenital or neuromuscular. Congenital scoliosis is caused by the malformation of the spine during embryological development, neuromuscular occurs in conjunction and as a result of other diseases like cerebral palsy and idiopathic, of which most cases are classified, is anything not covered by the others.

Notable symptoms of scoliosis include uneven shoulders, raised or uneven hips, leaning to one side and back pain.

The condition is treated through a combination of observation, treatment and surgery depending on severity. In some cases without treatment individuals can lead healthy normal lives, however in more severe cases the condition can worse causing extreme pain, deformation and in some cases death.

Dorothy Pate Calera Dorothy Pate, age 84, of Calera, passed away Monday, July 1. The visitation will be from 10-11... read more