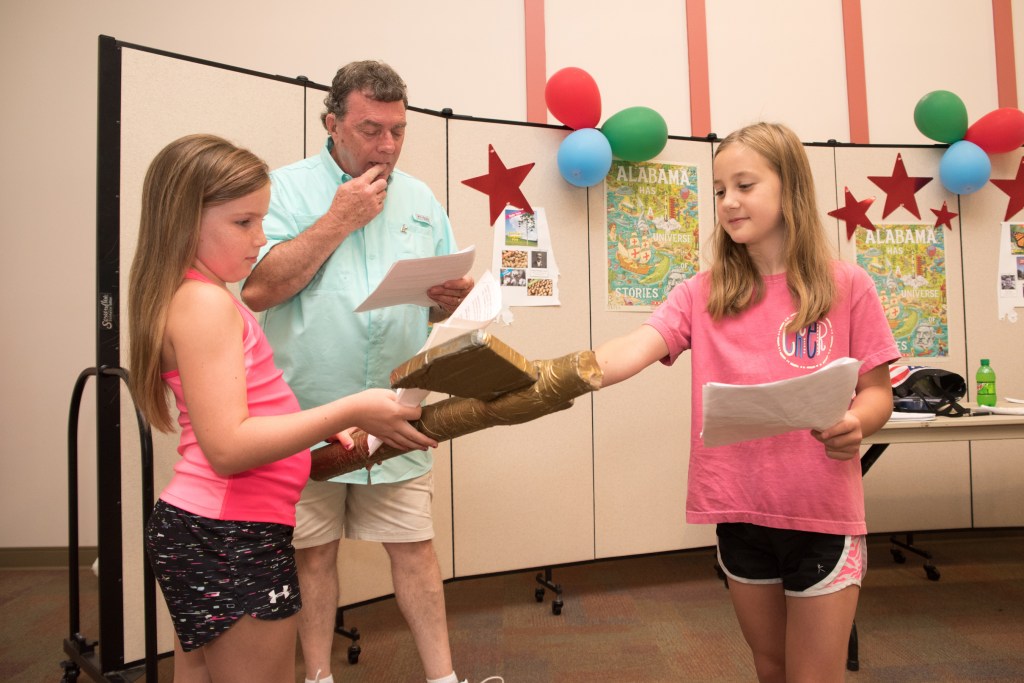 ALABASTER – Children enrolled in the six-week drama workshop at the Albert L. Scott Library are busy preparing to showcase what they’ve learned to the community on July 16.

For the past few weeks, children ages 8-10 have been meeting at the library every Tuesday at 5:30 p.m. to hone their acting skills. Classes for kids 11-15 are held at 6:30 on Tuesdays. To participate in the workshops, children must’ve been signed up to a participant in the 2019 Summer Challenge Program.

The workshops are taught by Darrell Revel, owner of Revel Repertory Theater Company, with assistance from his daughter Meredith.

Revel also teaches theater classes at UAB’s ArtPLay and is the head of the drama department at Phillips Academy. This summer marked his 16th summer teaching at the library. He said many of the children participating in the workshop are not newcomers.

“Some students participated last year as well,” he said. “A lot of them attend for at least two years to get the full experience.”

Since there’s a limited amount of time to work with the students, Revel has divided the summer workshops into two parts: process and product. One summer is spent focusing on the process of creating a theater production, like learning acting and auditioning techniques and preparing monologues, and then the next summer is spent producing short plays. Revel said some kids use the monologues they learn to audition for commercials or plays.

Week one of the program was spent auditioning for roles, and during week two, the children learned what roles they would play and got their scripts. Weeks three and four were spent staging and blocking the play and rehearsing with props. The set displays and lights were incorporated during week five. The performances are scheduled for July 16, the sixth week.

“The classes are fun, but they also serve other purposes,” Revel said. “This draws kids to the library and it helps strengthen their reading skills. Reading is essential to interpreting plays and outlines for skits.”