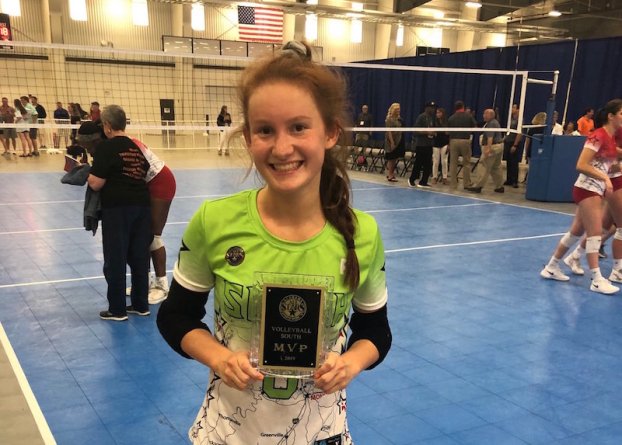 Chelsea’s Victoria Schmer was named the MVP of the 2019 North-South All-Star Volleyball game after helping lead her team to a 3-0 victory. (Contributed)

MONTGOMERY – The South beat the North 3-0 at the Cramton Bowl Multiplex on Thursday, July 18, to win the 23rd AHSAA North-South Volleyball All-Star competition held annually during All-Star Sports Week, and it marked a special day for four Shelby County players.

With the four players split down the middle between the two teams, Chelsea’s Victoria Schmer and Pelham’s Erin Long were both victorious in the straight-set victory for the South, while Thompson’s Kolbi Reed and Spain Park’s Paris Morris each flashed signs of brilliance at times despite the loss as part of the North team.

Though the final score was 3-0, each set was tightly contested, especially the last two sets as the North team battled to stay alive. After dropping the opening set 23-17, the North battled back in the second set.

While they ended up falling 25-23 in the second set, the North showed why they are an All-Star team with a much more competitive spirit. With that spirited effort in the second set, it was difficult to come back in the final set as the South went on to win 25-18 to put away the straight set victory thanks to a strong run late.

One of the biggest reasons for the dominant straight-set victory was the play of Schmer, who is heading into her senior season for the Hornets. Schmer picked up 19 digs and five assists in the win to win the Most Valuable Player award for the event.

The success as a team player was nothing new for the All-County First Team libero who posted 792 digs during her junior season, while also picking up 132 aces.

Long, who is one of the county’s most talented athletes thanks to her effort in volleyball and track and field, also played a key role in the victory as an outside hitter. A player that totaled 381 kills, 316 digs, 38 blocks and 34 aces as a junior, she’ll be one of the best returning players heading into her senior year with the Panthers.

Despite being on the losing end, in an All-Star event, it was about honoring the best players in the state and that’s exactly what Reed and Morris will be heading into the 2019 season.

During her junior season with the Warriors, Reed was part of an impressive attack at the net thanks to 281 kills and 194 digs, which earned her a spot on the All-County Second Team.

Morris wasn’t too far behind that mark, and like Long, she did a little bit of everything. She posted 277 kills, 82 digs, 81 blocks and 66 aces as a junior and will likely up those numbers this season.

Competing in the North-South game is something they’ll only get to do once, and each player will use that honor to propel them into a special season with their teams.