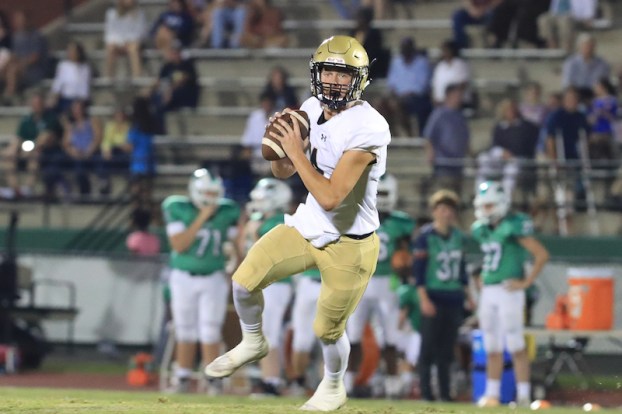 Jonah Carroll, above, will be key in Briarwood backing up its No. 1 preseason ranking. The Lions head into the 2019 season looking for redemption in their region. (File)

For 29 years, Fred Yancey roamed the sideline as the head coach of the Briarwood Lions, but for the first time in 30 seasons, the Lions will be under the direction of a new head coach after Yancey announced his retirement in the offseason.

But, with former defensive coordinator Matthew Forester now taking the reins, there shouldn’t be too much concern with how good this year’s Briarwood team can be. Having some of the best defenses in school history in recent years, staying in house with Forester will keep BCS in a position to continue to dominate defensively, while offensive coordinator Bobby Kerley is also still on board.

And to make the job a little easier for Forester, the Lions should have plenty of motivation heading into the season after losing the region crown and falling in the second round of the playoffs last year.

Last year’s 26-0 loss in the second round of the playoffs to eventual Class 5A runner-up Vigor wasn’t what the Lions expected after one of the best defensive efforts in school history. Nor was losing the region crown to Ramsay.

Now, heading into the 2019 season, Briarwood will be looking to snatch the region crown back and make a run at a state championship with plenty of talent back and the right coaching staff in place to get the job done.

Last year’s struggles revolved around the inconsistency offensively. From former athlete J.R. Tran-Reno attempting to run quarterback to eventually putting in sophomore Jonah Carroll, there just never was any consistency at the quarterback position which led to the Lions eventually deciding to groom Carroll, which now may pay off in 2019.

Carroll will return to the position as the expected starter for his junior year, while there is much more depth at the position to push every quarterback to be better. Behind him, Christopher Vizzina is a promising freshman that will be really good, while five others are capable of also playing the position.

While losing Tran-Reno as an athlete will be a major blow to the offense’s production thanks to his three years as a starter, senior Luke Prewett will help the drop-off seem far less drastic.

Prewett played a lot of snaps at running back as a sophomore and started for the majority of the year last season, which makes him a third-year guy at the position. He’s poised for a big year if he stays healthy.

Behind him will be senior Christian Ferguson and junior Andrew Hill, who are both workhorses with great vision.

While the run game was strong last year, the lack of quarterback consistency and a go-to wide receiver were the big question marks, and this year, both seemed to be in better shape.

Senior Blake McKenna will be a leader at receiver thanks to a good size and strong route-running ability. Next to him will be juniors Brooks Donnelly and Bailey Salmon, as well as senior James Hancock. Sophomore Luke Reebals is also an exciting playmaker that should step into a prominent role.

Just one or two of those guys stepping up can take the Lions to a new level this year, along with patience from the quarterback to find the open guy.

Something that will test the Lions’ success offensively early in the season will be how quickly four new starters on the offensive line will play.

The good news is the return of 6-foot-4, 285-pound Trent Howard as a three-year starter who is committed to Georgia Tech. He is one of the best linemen in the state and should help newcomers like Alex Miller, Clayton Rasmussen and Christian Pearson come along.

All three of those guys are seniors that know the scheme and what they are supposed to do, which should help them slide in without too much concern. Carson McKinney, Harris Smith and Abner Taylor should spend time on the offensive line as well.

As usual, the defensive side of the ball should keep Briarwood in every game this season.

Unlike the offensive line, the defensive front will have a rarity when three starters return for the season. With the Lions being a senior-heavy team most years with guys waiting their turn and then stepping in, they tend to replace a lot on the line.

This year, however, the return of seniors Parker Will, Cole Garner and Turner Murphey have that position set up to be one of the strongest on the team and capable of winning the battle in the trenches each week. Garner totaled 43 tackles, 15 tackles for loss and seven sacks last year, which makes him a dangerous threat heading into 2019. Tyler Smith, Daniel Corbin, Miller Stubblefield and Holden Patterson will add depth.

Behind that strong defensive front, the Lions will have to replace some production at linebacker, specifically with the loss of Mark Hand, who posted 138 tackles, 6.5 tackles for loss and 5.5 sacks last year.

Cal Reebals will be the lone returning starter at the position after posting 56 tackles, 12 tackles for loss and four interceptions last year. Juniors Luke Hand, Tyler Waugh and Parker Hudson all spent time there last year, and will now step into a starting role. Adding a fifth player to the position will be senior Crawford Kent.

Like the middle of the defense, the secondary will only return one starter to the backend as well. The loss of Cade Dickinson in particular will prove to be a tough blow for the Lions after he posted 60 tackles, five pass breakups, four forced fumbles and two interceptions as a senior.

Junior Alaster Harris will mark the only returning starter in the secondary, while Chase Travis got a lot of playing time at the position last year and will be a starter in 2019. Andrew Jones is a senior that is expected to step up and play a big role, while juniors Cal Higdon and Eli Steadman should be key contributors.

Special teams will also be a highlight thanks to the return of All-State kicker Noah Nall, who went 5-for-7 on field goals last year with a long of 43 yards.

Prediction (8-2): Coaching change or not, Briarwood is always expected to be one of the best teams in the 5A classification, and this year, the Lions will enter the season with the preseason tag of No. 1 yet again. If they are going to live up to that hype, the Lions will have to be better offensively. That will all depend on the quarterback and receiver. If there is something to look for early in the season, it’s how Briarwood handles the passing game. Improvement there, and the Lions are easily a favorite to compete for a state championship, but struggle could make this season difficult. I don’t see any way they are worse, and with more options at receiver and a returning quarterback, they should be improved. If that improvement comes to fruition and pairs with the usual stout defense, Briarwood will compete with Ramsay to take back its region crown.

By ALEC ETHEREDGE | Sports Editor The fan base wants it desperately, the players want to be the ones to... read more