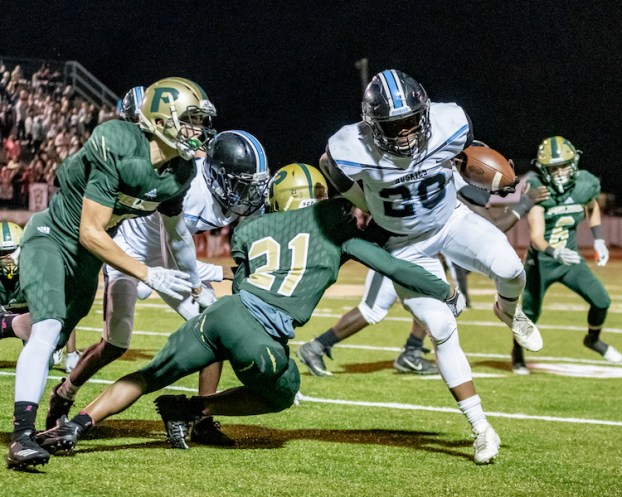 Helena's Marquise Johnson, No. 20, will return as one of the county's best running backs this season. He is one of several returning playmakers to this year's team. (For the Reporter/Jeremy Raines)

There may not be a team with more excitement surrounding it heading into the 2019 football season than the Helena Huskies.

Winners of four of their last six games and two losses in their last seven by 13 points or less, including a six-point loss to eventual region champion Jackson-Olin, the Huskies were one of Shelby County’s hottest teams near the end of 2018, and under a first-year head coach.

Not only will the Huskies carry that confidence into a new year and the second year under head coach Richie Busby, but they’ll also return almost every starter and a total of 27 seniors.

The ingredients are there for Helena to have a special season, but it’s up to the Huskies to mesh together and believe it’s possible.

With everybody back on both sides of the ball, the Huskies should take a major stride in the right direction, making each side of the ball more productive.

Offensively, three-year starter Luke Stamba will return at quarterback for his senior season. Having started since his sophomore year, last year marked his first under a new head coach, but he’ll now enter year two under Busby, which should help his production, especially with several key pieces around him and one of the best offensive lines in the area.

Stamba missed two games due to injury last year, but heads into 2019 healthy and poised for a special year.

One of the key pieces in place to take pressure off Stamba will be running back Marquise Johnson, who ran for 1,111 yards and eight touchdowns in just eight games.

That has him as one of the best returning running backs in the state this year with a veteran offensive line set to block for him. He’ll get some help from Brodie Jones and Colby Hughes. Jones is a speedy and strong back like Johnson, while Hughes adds a power runner for short yard situations.

Stamba will also have several trustworthy receivers to look for led by the return of senior Riley Marks. As a returning starter, he’s a player that is competitive and knows exactly how to find the open seam.

Other seniors joining him will be Leon Moore, Chris Miller and Will Griffith. The combination of size and speed between those three can be lethal, while sophomore J.C. Sivley brings a frame of 6-foot-4, 200 pounds to the table with great hands. Kingwood transfer Antonio Ruiz could also have a special season and will get time.

Ladarrius Rice, the school’s first ever player to receive a power-five offer from Wisconsin, will play some at receiver, but is slotted to be a lockdown defensive back.

Perhaps the most important and promising position for Helena’s offense will be the offensive line thanks to the return of four starters. Seaburn Hines will lead the unit as one of the best offensive linemen Busby said he has ever coached.

He’ll be joined by seniors Sam Regina and Chase Perry, while junior Matthew Ray will be the fourth returnee. Right guard is the only position up in the air and Jack Blantan, Joe Randal and Turner Morrison will rotate there.

The defensive side should be just as experienced despite a few changes to positions.

Up front, the Huskies will see linebackers Tucker Knight and Cole Pugh move up to the defensive line after being two of the team’s top tacklers last year. Both of those guys are seniors, as is Ethan Trimm, who will handle a defensive end position and is primed for a big season. Junior Joey Corbin and sophomore Joel Logan will have big impacts on the line as well.

While two of the team’s linebackers from last year have moved up to the defensive line, Nathan Dunaway will return as Helena’s leading tackler from last year after posting 106 tackles, 11 tackles for loss and two sacks.

He’s a leader on that side of the ball and a team captain that can make a difference. The rest of the unit will see several sophomores stepping in to play, but several of them played last year, including Peyton Woodall, Iceberk Cave and Noah McDonald.

Rice will lead the secondary this year as the team’s best athlete. Standing at 6-foot-2, 190 pounds, he had four interceptions and 33 tackles last year. He’ll be joined by seniors Zach Goodwin, Jade Hildreth and Chase Smith. Busby said all of those guys can play collegiately and bring veteran experience to the table.

On special teams, Logan Maloney will return to handle all kicking duties, while the return game will likely see rice and a few other athletes capable of making a big play.

Prediction (7-3): I was close to going 8-2 or 9-1 with Helena, that’s how much confidence I have in them going into the 2019 season. So the 7-3 prediction is a worst-case scenario, if the Huskies play up to their potential that is. With the most seniors in school history and everybody back on a team that won four of their last six games and lost to the eventual region champ in overtime, everything adds up for Helena this season. They showed they improved during Busby’s first year, and now with a full season and offseason with him, they should start the season like it ended last year. I expect the offense to take a drastic leap forward and for the defense to be no worse, which already equates to a winning football team. If the Huskies believe in themselves winning big games, watch out for this team in 2019.

By ALEC ETHEREDGE | Sports Editor HELENA – When the Helena Huskies burst through the banner and run onto the field... read more