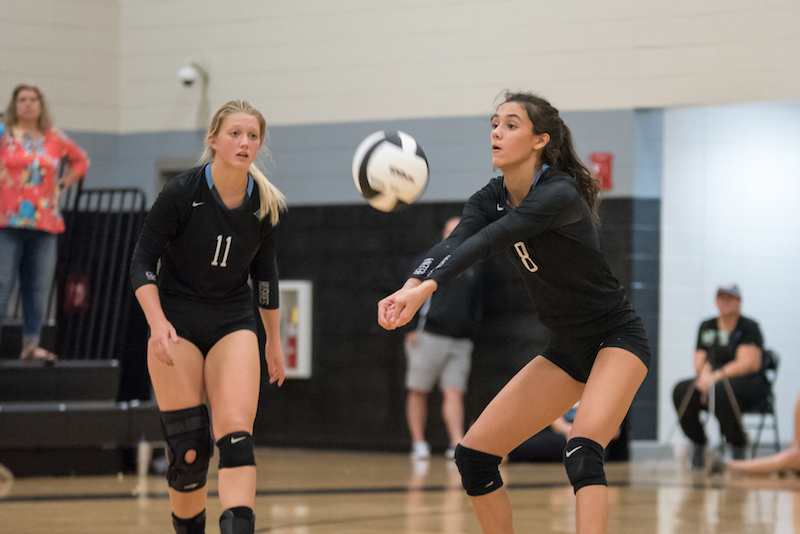 Helena will lose 10 seniors from last year's volleyball team, but it's a team that continues to progress and has the expectation to be as good or better this year. (Reporter photo/Keith McCoy)

HELENA – Last year looked promising for Helena’s volleyball team with 10 seniors on the roster, but a difficult loss in a top-six battle in the area tournament to Chelsea ended the Huskies’ season short of the postseason.

A year later, and Helena will have a different roster in 2019 with the departure of those 10 seniors and just one senior on this year’s team, but that doesn’t change the expectation for the Huskies or head coach Amanda Lewis.

“My expectations rarely change from year to year,” she said. “I don’t coach down and I don’t coach up depending on the talent. They know that I expect their best effort in every situation. On the court, in the classroom, outside of school, and in the community. We push accountability and responsibility; along that journey we like to win some volleyball games too.”

Even with the loss of so many talented seniors who enriched the program, Lewis instills her expectations as soon as they get into the program, which keeps there from being too drastic of a drop off when a big group leaves.

“We try to instill a strong sense of leadership throughout the program from the beginning, so I believe that will not be a driving force that holds us back,” she said. “This group of girls that I have coming up are one of the most competitive and hard working groups I have ever coached.”

If hard work and competitive spirit pays off on the court, Helena should be in store for a special season yet again.

The biggest problem will be the competition in Class 6A, Area 8. Going into the season Chelsea and Pelham are both ranked inside the top five and will be favorites to come out on top.

Last season, the Huskies and Hornets were even teams throughout but in the area tournament were forced to face each other in a six versus seven matchup.

Chelsea went on to win that to advance to the postseason, while Helena’s season came to an end. That’s something Lewis is taking as a lesson for her team, while also moving on to a new season knowing that’s in the past.

“We did not capitalize on the balls we needed to in order to be successful and it resulted in a loss,” she said. “But, that was last year and that loss does not define us or our program. Honestly, I haven’t thought about it much since. Whether we win a game or a point we are always preparing for the next one. We strive every practice to get better with every contact and never miss a rep or skip a second of instructional time.”

And getting better is all Helena is focused on ahead of the season. The Huskies will compete in that difficult area once again, but with last year out of sight and out of mind, the challenge of a new season in a difficult area excites the team.

“I love playing in a tough area,” Lewis said. “Area games, no matter who we play, always bring out the best competition. It makes for a smoother transition come postseason play. We don’t have the stresses of the unknown because we already have some of the best teams in the state in our area. It feels like we get to play “postseason” games all season long, which is great when working on our mental and physical game.”

The lone senior on this year’s team will be Jenna Winter, who will not only be a great leader but a motivator of the group, while Izyriah Kenny will also be considered a leader.

“She leads by example and effort,” Lewis said of Kenny. “I think she also does a great job of holding others accountable.”

Those two leaders will be part of a collective group of players that has great chemistry.

“This group has played together for quite some time while coming on the chain so their chemistry is great,” Lewis said. “Half my team are multi-sport athletes that don’t play club volleyball, and I think that has brought an energetic dynamic to the team because they are eager to play.”

While there is still work to be done, it’s a competitive group that wants to do what it takes to continue to improve and compete for a title.

“Our main focus has been ball control and getting comfortable with the uncomfortable,” Lewis said. “We have a lot of work to do with skill development this year, but these girls have a mentality that can’t be coached into a player.”

Helena will open the 2019 season at the Boddie tournament held at the Finley Center in Hoover Aug. 23-24. The Huskies’ first home match of 2019 will be against Huffman on Tuesday, Aug. 27.