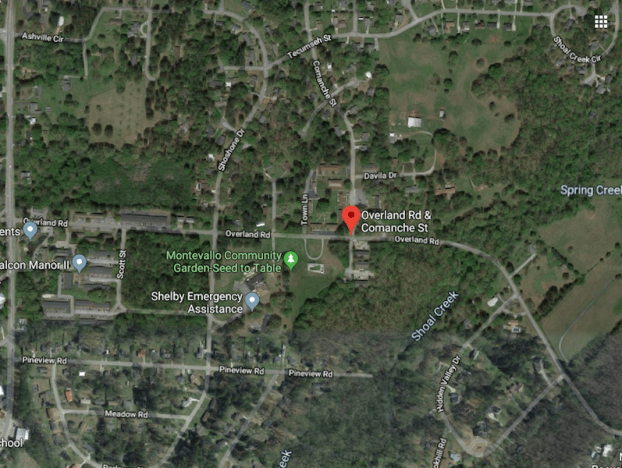 The Montevallo City Council approved a proposed amendment to the city’s special district zoning to allow for more apartment buildings to be built at an existing complex near the intersection of Overland Road and Comanche Street. (Contributed/Google Maps)

MONTEVALLO – The Montevallo City Council has approved a proposed amendment to the city’s special district zoning to allow for more apartment buildings at an existing complex located near the intersection of Overland Road and Comanche Street.

During a public hearing on Aug. 12, the council reviewed a developer’s request to add three additional apartment buildings and 10 units per building at Shoal Creek Apartments, and then invited citizens to speak for or against the request.

“Adding the three additional buildings will provide a gross density of 7.7 dwelling units per acre, which is less than the allowable 8.6 units per acre,” Brooks said. “We’re still below what they could have in the R-2 special district.”

Wade Lowery with Engineering Design Group said the plans meet the density requirements in the city’s current zoning code, which was approved in 2012, and added the reason behind the request to allow 10 units instead of eight in each building is that the two additional units in each building would be single-bedroom units to keep up with tenant demand.

“From the time the original apartments were constructed, the demographics for units have changed,” Lowery said. “The owner has requests for single units all the time. The driving force was requests (made to) the owner for single-unit properties.”

Nearly a dozen citizens spoke in opposition to the development plans, expressing concerns about traffic flow increasing in nearby subdivisions, property values decreasing, oversaturation of apartments in that area, drainage issues and crime rates.

“I understand the concerns in the neighborhood, but we have to look to the law and what’s already permitted,” Mayor Hollie Cost said. “We have to lean back to what our laws are and what our policies are. This is permitted use on this piece of property.”

Cost and Councilmembers Willie Goldsmith, Tiffany Bunt, Jason Peterson and Arthur Herbert voted in favor of the amendment, while Councilman Rusty Nix voted against it.

By GRAHAM BROOKS / Staff Writer HELENA – A new place of worship is now open in the city of... read more