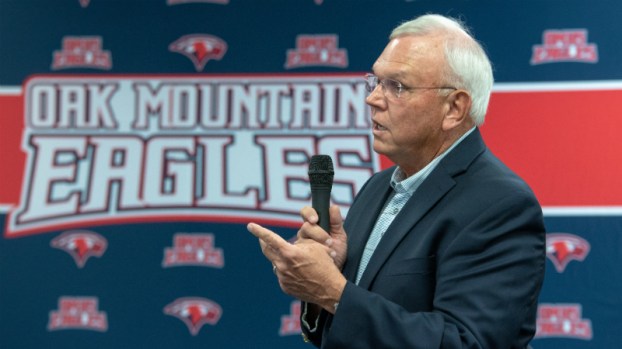 While welcoming the more than 50 people in attendance that included educators who were involved with the school’s opening 20 years ago, Principal Kristi Sayers called OMHS a “special place.”

Former principal and Shelby County Schools superintendent Randy Fuller said he was hired a year before the school opened, and leaders had the foresight to recognize Oak Mountain would be a “flagship school.”

Getting the school and its programs off the ground included hiring the right people and a $1.5 million loan to build athletic facilities, Fuller said.

“Everybody here wanted it to be that flagship, that star school, and it was,” Fuller said. “And it was successful in every area from the beginning.”

The school grew from 999 students its first year to about 1,700 students four years later. Enrollment is now just more than 1,500.

SCS Superintendent Lewis Brooks said Oak Mountain High School’s worth is evident in accolades it has received but more so in the success of its students.

“We’re very proud as a school system of this community and this school,” Brooks said.

Shane Gallman and Tommy Youngblood were two of the educators who were hired for the school’s opening and are still there.

They said they remember a hectic start that included rails being up at the football stadium hours before the first game and similar last-minute construction at the school.

Of course, the school’s opening was transformative for the North Shelby County community.

“It was a big deal,” Youngblood said.

Gallman said he had no concerns about going to work at a new school.

“You knew it was going to be a good community,” he said.

The Oak Mountain Masters were on hand at the event to serve refreshments and give tours of the school, and visitors learned about an opportunity to leave a legacy at the school they support.

The bricks can be customized with names and messages and will be placed in the area leading to the school’s front door.

For more information, contact the school at 682-5200 or email k4parker@shelbyed.org or kdevaughn@shelbyed.org.