Briarwood can’t keep up with Pleasant Grove in 2nd half 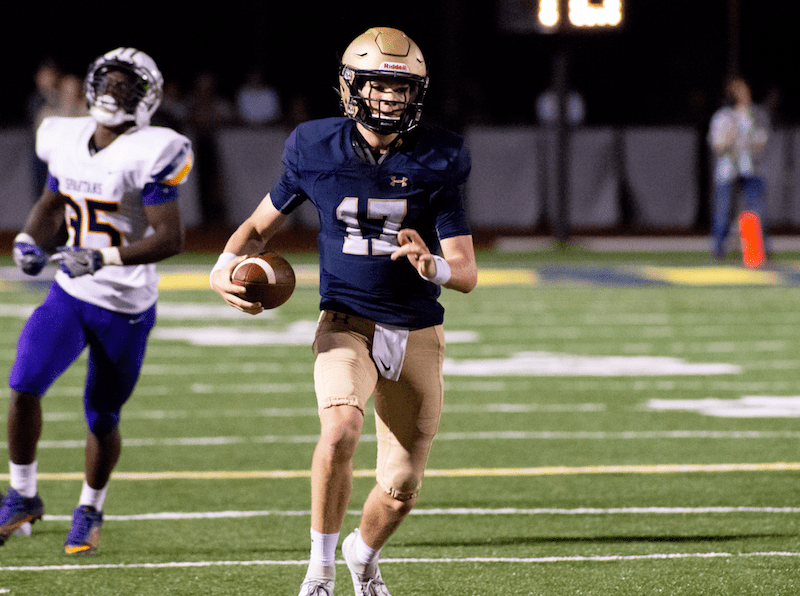 The Briarwood Lions gave up 12 unanswered points to Pleasant Grove in the second half on Friday, Sept. 6, to drop a tight game 26-14. (For the Reporter/Jeremy Raines)

By JEREMY RAINES | For the Reporter

NORTH SHELBY – In week three of the 2019 high school football season, first-year head coach Matthew Forester looked to lead his Briarwood Christian Lions to a bounce-back win on Friday, Sept. 6, after a heartbreaking 17-14 loss to rival Chelsea High School a week earlier, but region foe Pleasant Grove was ready to deny that opportunity.

The Lions were also ready in the early going and matched Pleasant Groves 14 first-half points with 14 of their own, but it was 12 unanswered points in the second half that made the difference in the game, as the Spartans started region play with a victory, while Briarwood dropped its second game in a row to start the 2019 season.

Briarwood quickly faced a three-and-out on its first drive, but got the ball right back after Pleasant Grove mishandled a snap to the quarterback, giving the Lions the ball on a recovered fumble.

The fumble gave the Lions possession from inside the red zone where a quick two-play drive ended with quarterback Jonah Carroll keeping the ball for a 1-yard touchdown plunge. After a successful PAT, the Lions were on the board first with a 7-0 lead with 9:41 left in the first quarter.

It didn’t take long for the Spartans to score, however, as a scramble by the Spartans’ quarterback bought him enough time to make a big 30-yard pass setting the Spartans up with first-and-goal. The Spartans punched the ball in on the very next play to get on the board, themselves. A successful PAT tied up the score with 7:45 remaining in the opening quarter.

Great defense from Pleasant Grove forced the Lions into a third-and-37 shortly after, which ultimately led to the Spartans getting the ball back.

They went on to put together a great drive, but the Lions showcased some tough defense of their own forcing a turnover-on-downs after shutting down the Pleasant Grove fourth-and-1 attempt. The celebration by the defense, however, didn’t last too long as the Spartans eventually tacked on another touchdown to take the lead 14-7 late in the first half.

With just over 3 minutes remaining in the first half, a 33-yard game-tying touchdown run by Luke Prewett brought the Lions right back. A late first-half effort by the Spartans fell short as the clock ran out before they were able to finish off the drive taking the 2 teams into halftime with a 14-14 tie.

Offensive production was limited for both teams after the halfway point as Pleasant Grove was the only team to put any points on the board during the third quarter, which allowed the Spartans to extend their lead to 20-14 after their PAT attempt was blocked.

The injury bug struck the Lions’ offense after that. Late in the third quarter, lineman Parker Will as well as Caroll both went down with injuries. Carroll didn’t return to the game, passing the quarterback duties to freshman Christopher Vizzina.

“He got thrown in the fire, and we thought he did a great job. We were really proud of him,” Forester said of Vizzina’s late call to action.

But at that point, Pleasant Grove had already seized the momentum.

Nearing the end of the game, and up by six points, the Spartans continued to show their offensive strengths this time through a big touchdown run from their own 30-yard line increasing their lead to 26-14 with only 4:25 left in the ballgame.

The Spartans went on to win the game 26-14 handing the Lions their second straight loss of the season.

The Lions look to jump-start their season next week as they welcome the 1-2 Woodlawn High School Colonels.