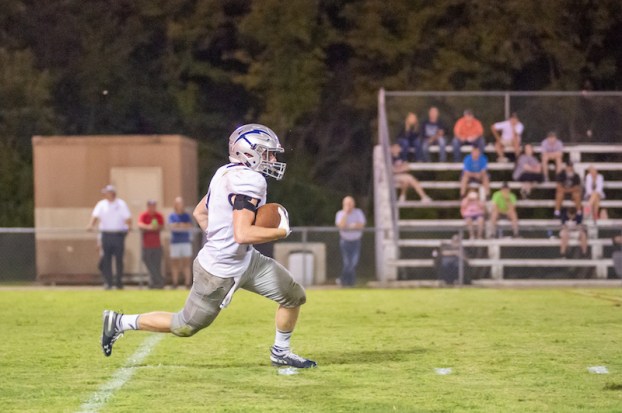 The Evangel Lightning improved to 2-1 on the season on Friday, Sept. 6, thanks to 82 points. (For the Reporter/Larry Dancy)

“I ain’t never been a part of anything like it. It was fun. It was just so fast, and we kept scoring,” said Evangel head coach Tim Smith. “We play at home next week. If you’ve never watched an 8-man football game, you need to come watch one. It’s good football. We have good kids, good athletes and they play hard.”
Noah Shears started the evening with a 65-yard touchdown run on Evangel’s first play. He went on to collect 111 yards on eight carries.

The Lightning racked up 517 yards of total offense, led by quarterback Tyler Henderson’s 11-of-13 passing for 312 yards and six touchdowns. He added 44 yards rushing and a touchdown.

Jett Lodge was Henderson’s go-to receiver with 219 yards on six catches. Four of his receptions were touchdowns of 76, 56, 49 and 35 yards.

Will Ferrel and Cooper Vowell added touchdown receptions of 20 and 36 yards, respectively.

Will Parker and Timothy Howell led the defense with 10 and eight tackles, respectively. Garret moore and Quillman recovered fumbles.

Evangel (2-1) will host the Freedom Cowboys out of Huntsville next week.

FROM STAFF REPORTS LaFAYETTE — The LaFayette Bulldogs got the 2019 home season off to a good start with a... read more