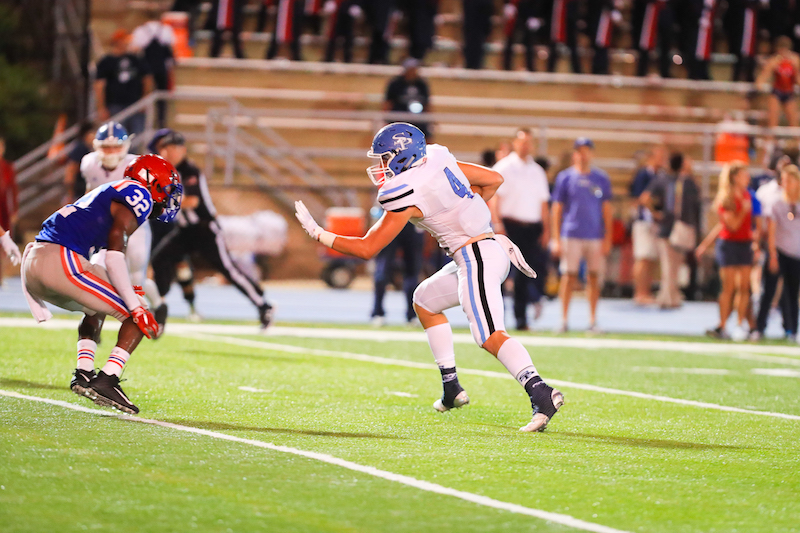 Spain Park's offense was contained by a good Vestavia Hills defense on Friday, Sept. 6, while the defense continued to struggle in a region-opening loss to the Rebels. (For the Reporter/Dawn Harrison)

VESTAVIA HILLS – With a combined 126 points between Spain Park and Vestavia Hills coming into their region opener on Friday, Sept. 6, a high-scoring affair was expected, but only one team was able to continue the early-season fireworks, as Vestavia Hills pulled away with easy for a 45-7 home victory over the Jaguars.

The Rebels, who also only allowed seven points in their opener a week ago against Homewood, have showed a strong balance on both sides of the ball early in the season and shut down a Spain Park offense that had scored 77 combined points through its first two games of the season.

Vestavia show a strong offense in a jamboree win against Briarwood and in the season opener against Homewood, and two plays into this game, the Jaguars found out the same thing thanks to an 80-yard touchdown run that put the Rebels on top 7-0 less than 20 seconds into the game.

From that point forward, there was no looking back.

The Rebels added another touchdown three minutes later after a quick defensive stand to extend their lead to 14-0 with 9:25 to play in the quarter. Controlling the game already, Vestavia Hills made it a three-score game late in the opening period thanks to a long field goal that extended the lead to 17-0.

Spain Park finally had an answer with one of the explosive plays we had become accustom to through the first two weeks when quarterback Harrison Barker hit Cooper Kelley for an 80-yard touchdown pass to cut the deficit to 10 points with four minutes left still in the opening quarter.

It took no time for Vestavia to put together another nice drive that saw the Rebels drive down the field before a 7-yard touchdown run from A.J. Powell put them up 24-7 with 11:09 left in the half.

Before you could blink, the Rebels had gotten the ball back and went right down the field before a 16-yard touchdown pass put them up 31-7 heading into the half.

Whatever adjustments Spain Park attempted to make at the half, Vestavia Hills was ready for.

The Rebels continued their torrid pace in the second half when a blocked punt led to one touchdown and a 62-yard run from Powell another to open up a 45-7 lead with 4:12 still left in the third quarter.

From that point forward, Vestavia was content to run the clock the rest of the way, which led to that being the final score.

Spain Park will now play host Mountain Brook on Friday, Sept. 13, in a game that has become extremely important after a 0-1 start to region play. The Spartans are currently 3-0 with wins over Northridge, Center Point and Tuscaloosa County.