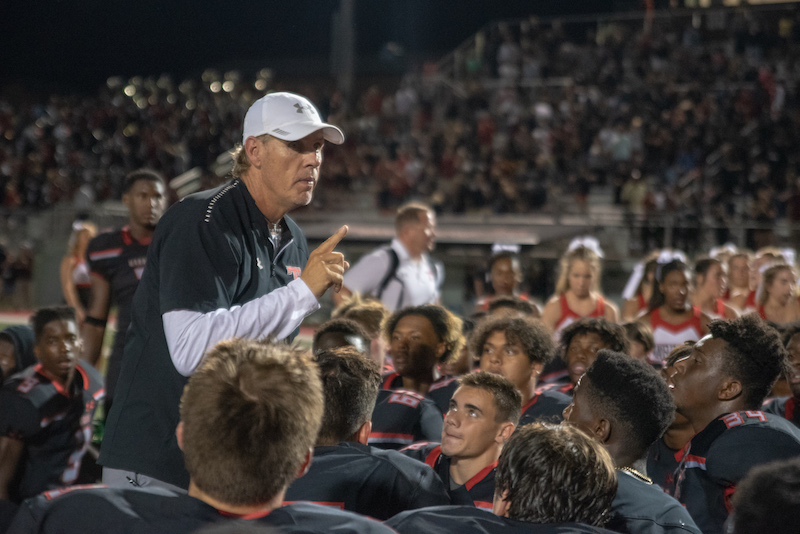 ALABASTER – When the clock struck zero on Friday night, Sept. 6, inside Warrior Stadium it wasn’t just an 18-point victory over the No. 1 team in the state that made it memorable for Thompson head coach Mark Freeman.

The fifth-year Thompson head coach, who has been a dominant coach in the state since 1998, picked up his 200th career win with the victory, making him one of the winningest coaches in the state’s history.

In just four years and three games, he’s already the third-winningest coach in Thompson football history with a record of 36-13, trailing only Ricky Seale’s 96 wins and the great Larry Simmons’ 98 wins.

As a head coach in the state of Alabama, Freeman has won six state championships, 12 region championships, eight Coach of the Year awards and boasts an overall record of 200-50.

He’s also made 12 appearances in the semifinals of the playoffs and made nine state championship appearances.

Freeman came to Thompson in 2015 and walked into a situation where the Warriors were coming off a 0-10 season. He immediately helped turn the program into a 5-5 football team each of the next two years, before then turning it into one of the state’s best.

Over the last two seasons and three games, the Warriors have gone a combined 26-3 with their only losses coming to the last two state champions in Hoover and Central-Phenix City.

Last year, Freeman helped lead the Warriors to their first state championship berth since 1982, and while they lost to Central-Phenix 52-7, it was a program-changing season.

Now, again in 2019, Thompson is off to a fast 3-0 start with an early win over the No. 1 ranked Buccaneers by a final score of 48-30. Before Freeman arrived, the Warriors had never beaten Hoover. Now, over the last five meetings, they have won three games against the state’s biggest powerhouse over the last 20 years.

This year’s team looks to be as good as if not better than the two Freeman has had at Thompson the last two years thanks to a 3-0 start for the second time in the last three years.

It’s been a remarkable start with a new quarterback in Sawyer Pate stepping in and handling his air raid offense flawlessly, and now it’s a team that has the confidence to get back to the state championship for the second year in a row.

Freeman has taken progressive steps at Thompson, and turned them into a championship-contending team, but the only thing missing is a state championship. That’s something his team hopes to accomplish this season with plenty of talent and redemption on their mind.

But for Freeman, he’ll be the first to tell you it’s not about the wins or championship, it’s about coaching up young men both on and off the field.

This offseason, he and the coaching staff knew they were losing All-State talent aplenty on both sides of the ball, but during the summer, he said how much fun he was having just getting to coach the kids.

Now, he’s on the verge of another stellar season, with a group of players that aren’t just talented but have shown a great work ethic together even with their backs against the wall at times.