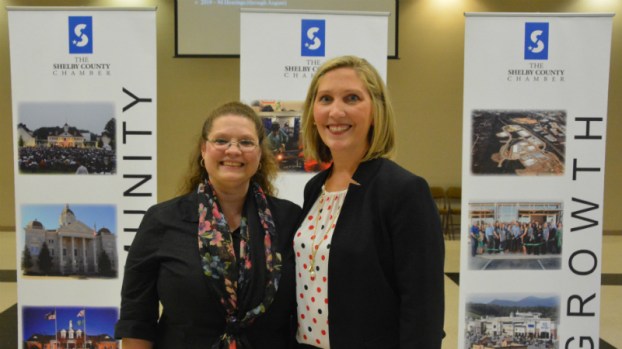 COLUMBIANA – Though it is clear how to deal with many health issues, such as bodily injury, where to seek help for mental health is not as established in society, and mental health also carries a stigma.

“We say, ‘Suck it up, deal with it, you’re going to be OK,’” Shelby County Probate Judge Allison Boyd said at The Shelby County Chamber’s Connections Luncheon on Thursday, Sept. 5. “Mental health is one of the issues facing our community that we just don’t have enough information about.”

But 43.8 million people in the United States suffer from some kind of mental illness, and out of Shelby County’s population of 215,707 in 2018, an estimated one in five adults suffered from some mental illness.

One out of every 25 people, meanwhile, suffer from a serious mental illness, which is described as affecting one’s everyday living.

A breakdown of mental illnesses in the United States includes 42 million suffering from anxiety disorder, 2.4 million from schizophrenia, 6.1 million from bipolar disorder and 16 million from major depression.

And 10.2 million adults have co-occurring mental health and addiction disorders.

Mental health is the leading cause of disability in the country with an untreated economic cost of more than $100 billion, said Boyd, who spoke at the luncheon along with Daphne Kendrick of Chilton-Shelby Mental Health.

While people may not talk enough about mental health issues, Alabamians named mental illness and substance abuse as the second largest health issue in the state, and officials are striving to reduce recidivism and divert sufferers to the correct avenues outside the prison system, Kendrick said.

The county received a $50,000 grant to address mental health issues, and a number of local officials have come together in an unprecedented effort.

The return on the investment will include increased treatment, more efficient use of public funds, less strain on jails and law enforcement, peace of mind and healthier people, she said.

By GRAHAM BROOKS / Staff Writer PELHAM – The Pelham Police Department is seeking the identity of an individual who... read more