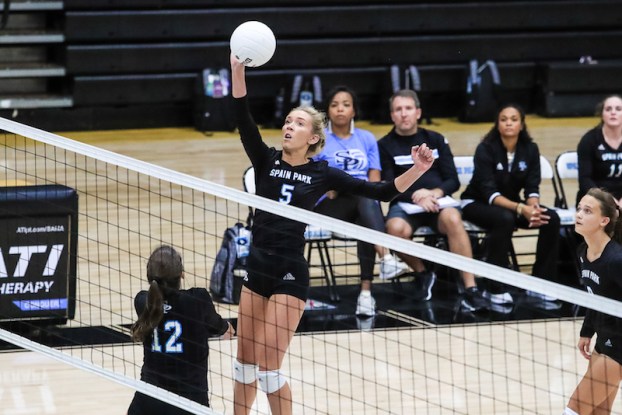 The Spain Park Jaguars bounced back from their first area loss of the 2019 season by taking down No. 9 Vestavia Hills in straight sets on Tuesday, Sept. 17. (For the Reporter/Dawn Harrison)

HOOVER – After hitting a stretch of five losses in seven matches, including a loss to No. 2 Mountain Brook in straight sets, the seventh-ranked Spain Park Jaguars bounced back over the weekend with a strong showing at the Rocky Top Classic and picked up another big win on Tuesday, Sept. 17, with an area sweep over No. 9 Vestavia Hills.

With the recent wins, Spain Park improved to 18-11 overall this season, but more importantly, the Jaguars improved to 4-1 in area play and have now beaten everybody in the area, aside from No. 1 Mountain Brook, at least once.

Following the sweep to the Spartans on Sept. 12, the Jags were looking for a big bounce back victory in area play when they hit the court against the Rebels and it showed with their effort.

In the opening set, Vestavia also showed why it’s considered to be a top 10 team answering almost every Spain Park run, but the Jaguars seemed to have a slight edge throughout and went on to pick up a 25-20 victory in the opening set.

That seemingly gave them all the confidence they needed because the next two sets, particularly the second set, weren’t nearly as close.

In the second set, Spain Park carried over the momentum it had gained from that opening-set victory and dominated from start to finish to pick up a 25-12 victory to take a 2-0 lead in the match.

With Vestavia now forced to win three consecutive sets to win the match against a team that had all of the momentum, it was tough for the Rebels to respond.

Spain Park knew that heading to the third set and didn’t look back.

The Jaguars took advantage, and while the Rebels put together some fight at times in the set, Spain Park was too much pulling away for a 25-17 third-set victory to complete the sweep.

Spain Park has already completed the season sweep of area foe John Carroll and now has one win against Hewitt-Trussville and Vestavia Hills as well.

The Jags will play one more area match against Hewitt, Mountain Brook and Vestavia between Oct. 1 and Oct. 8, as they look to claim one of the top two spots in the area tournament.

Thompson remains No. 1 in latest poll, 4 others receive votes