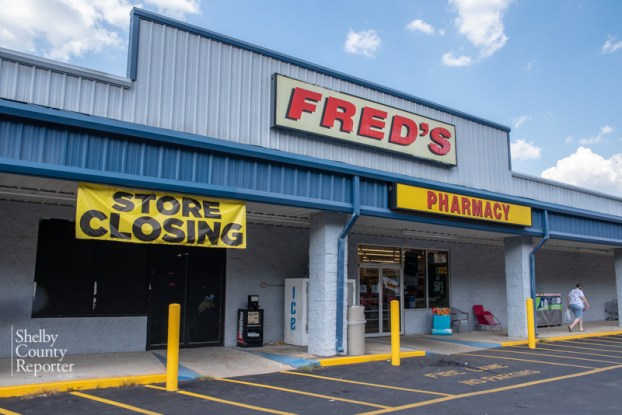 Fred’s Inc. has announced the closure of all of the company’s retail stores and pharmacies, including two locations in Shelby County. (Reporter Photo/Keith McCoy)

According to the Associated Press, the Memphis, Tennessee-based company said in a statement Sept. 9 that it has filed for chapter 11 bankruptcy and has begun liquidation sales at all of its retail locations, two of which are in Columbiana and Montevallo.

Closing dates for the stores have not been released.

“I hate to see that happen to that corporation,” Columbiana Mayor Stancil Handley said during his report at the City Council meeting Sept. 17, and added he has received multiple inquiries from people interested in buying the Columbiana Fred’s building once it is vacant.

News of the company filing for bankruptcy and closing all stores and pharmacies came after the company announced earlier this year its intent to close certain stores.

According to the AP, the company said it expects to continue fulfilling prescriptions at most of its pharmacy locations, while pursuing the sale of its pharmacies. Fred’s has filed a motion with U.S. Bankruptcy Court seeking up to $35 million for a financing agreement with certain lenders. Chief Executive Officer Joe Anto said despite the company’s best efforts, “we were not able to avoid this outcome.”

Fred’s started in 1947 and offered customers “nationally recognized brands, proprietary Fred’s label products and a full range of value-priced selections” in its stores throughout the southeastern United States, according to Fredsinc.com.