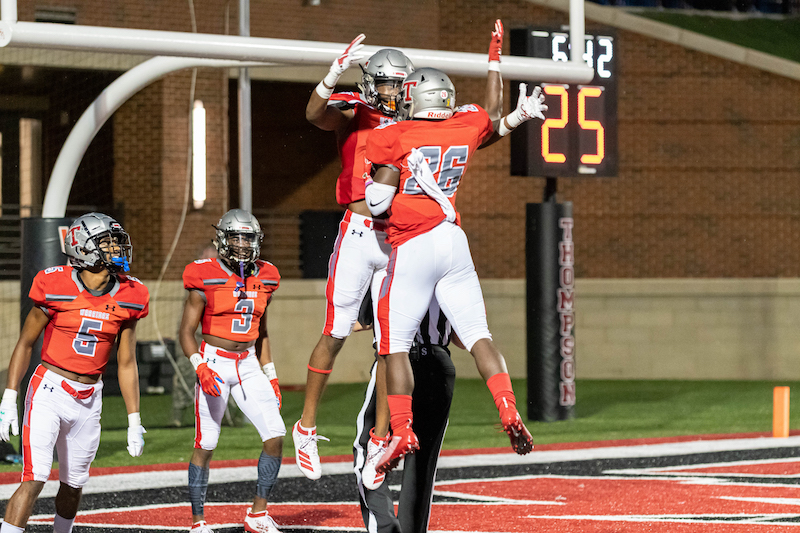 Now in the second half of the high school football, there will be several key region matchups this Friday night. (For the Reporter/Neal Wagner)

We are now over the midway hump and into the second half of the 2019 football season. After a break from region play, and several teams taking a bye, we dive back in with a full slate of region games this week as several teams look to battle for a playoff spot with just a few weeks of region action left.

This week will see Chelsea and Helena participate in our Game of the Week, which has its own prediction story, while Spain Park and Thompson compete in a big region showdown. We’ll also see the Briarwood Lions look for their fourth straight win and the Montevallo Bulldogs look to bounce back from their loss to American Christian two weeks ago now coming off a bye.

Oak Mountain, Calera, Shelby County, Vincent and Evangel will all compete in big games as well, while Pelham will look to pick up its first win of the season in a Thursday night matchup.

Spain Park is coming off its first win of the season with a 28-24 victory over Hewitt-Trussville, but there has been no hiding the Jaguars’ struggles defensively giving up 40 points per game this year. This week, they get a Thompson offense that is one of the best in the state averaging 48.8 points per game. The Warriors have scored 40 or more in every game and have scored 48, 51 and 63 in their last three. Spain Park’s offense is dynamic and can keep them in it for a while, but the Thompson offense will score at will in this one. Thompson 49, Spain Park 21

The Oak Mountain Eagles are coming off of their first win against Pelham since 2008, which was a big confident boost for this team, but now, they’ll get a difficult matchup against 5-0 Mountain Brook. It’s a Spartans’ team that wasn’t supposed to be as good this year, but has played solid on both sides of the ball giving up just 17.8 points per game and scoring 32 points per game. I think the Eagles can compete in this game, but the offense has struggled at times and they’re going up against one of the best defenses in the state that is coming off a bye week. Oak Mountain 14, Mountain Brook 28

Calera has now lost four consecutive games since its opening-night 27-20 victory over Pelham, but now the Eagles get a matchup against the only team they beat last year—the Selma Saints. Calera won that game 23-6, and should have a chance to do so again. But Selma, despite inconsistency this year, has been better with a 3-2 record. They’re average on both sides of the ball, but I need to see a complete game from Calera to have faith in the Eagles moving forward. Calera 20, Selma 28

This is the exact game Pelham needs to end its 0-6 start. That doesn’t mean it’s an automatic win by any means, but it’s the Panthers’ easiest game of the season to this point. Carver (1-4) is giving up 38.2 points per game, and while Pelham is giving up just a shade less at 34.7 points per game, this is a Panthers’ offense that has talent and speed and has been waiting for a team to showcase it against. With no turnovers and a performance like they had offensively against Chelsea, I like the Panthers in this one. Pelham 31, Carver 28

After a 0-2 start, Briarwood has won three in a row. Now, the Lions get a John Carroll team heading in the opposite direction with four consecutive losses. Briarwood’s defense has gotten better the last two weeks and is giving up just 16 points per game, while playmakers are also emerging offensively. Briarwood 31, John Carroll 14

Last time we saw Montevallo, the Bulldogs lost 84-30 to American Christian. This week they’ll get a 2-4 West Blocton team that is giving up 34 points per game and has given up 50 or more in two of its last three games. This Montevallo offense should be fully healthy again off the bye week, and they’ll be ready to rebound with an offense still averaging 48.4 points per game. Montevallo 42, West Blocton 34

Last week I said Vincent would get its first win of the season and was wrong, as the Yellow Jackets fell 40-24 to Winterboro. But while it might not look like it on paper at 0-5, they’ve made progress each week. Now, they get another winless team in 0-5 Central Coosa. But this week, I have even more confidence in a win. The Cougars have scored more than six points one time this season and are giving up an average of 51.2 points per game. Vincent has to and will capitalize. Vincent 35, Central-Coosa 12

This is always Evangel’s big 8-man matchup, and it’s extremely compelling this year with Ezekiel now sitting at 6-1 this season having scored 40-plus in its last five games. That being said, the Knights have given up 30 or more in their last three games and go up against an Evangel offense scoring 41.7 points per game. It will be close, but the Lightning will be motivated to pull away late. Evangel 56, Ezekiel 42