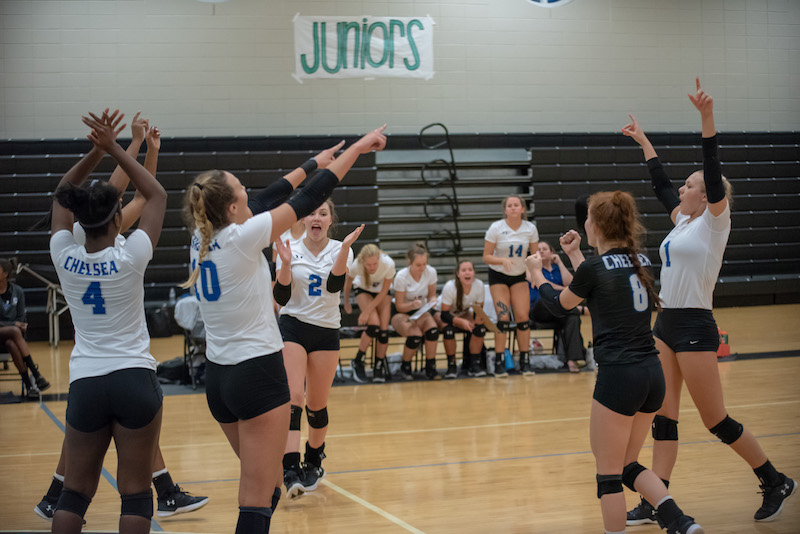 The Chelsea Hornets continued an incredible season with an area sweep against Calera on Tuesday, Oct. 1. (File)

CALERA – The Chelsea Hornets have been on an absolute tear since their loss at Pelham, Sept 17 reeling off 16 straight victories and despite meeting a feisty Calera team on the road on Tuesday, Oct. 1, they continued their dominance winning in straight sets 25-20, 25-20, 25-18.

“I think Calera did a good job of adjusting to some of our hard hits,” said Chelsea head coach Jessica Pickett. “We were a little off today, we weren’t connecting well, had a lot of service errors and hitting errors, but we’re going to come in tomorrow, focus in, and correct everything before Thursday.”

The Hornets (35-2, 4-1) began with a rough start that included four straight errors to open the first set. Once settled in, Chelsea began to find a rhythm, but wouldn’t brush off the hometown Eagles easily.

The teams were tied six times before the Hornets took their first lead on the last of three kills from junior Hope Wright at 17-16, then pulled away from Calera at the service line.

Anna Sartin hit back-to-back aces early on in the set, Wright added another and then freshmen Emma Pohlmann provided the big finish with three straight aces to win the set.

Chelsea jumped out to a 7-4 lead in the second set and doubled the lead to 15-8 as senior Zoe LaBreche began to take over. The outside hitter slammed four kills to the court during that stretch and only got stronger as the match wore on.

As the lead stretched to 21-13, the Eagles appeared beaten, but went on a 7-3 run to the delight of the home crowd before finally bowing out.

The Hornets took the first four points of the final set and, again, did not relinquish the lead. LaBreche was unstoppable again registering seven of her team-high 15 kills in the set including the game winner to seal their fourth area victory.

“Zoe brings a lot of energy and positivity, she actually gets more excited when her teammates are doing well than when she is,” Pickett said. “We needed her to step up tonight, we were struggling to connect in some other places so she stepped up like we needed her to.”

Wright finished with 10 kills and shared the team lead in digs with teammates Victoria Schmer and LaBreche with 11 each. Bailey McIntyre was huge leading the offense and setting up her teammates with 33 assists. She also had impeccable timing going five for six in trick kills.

“She did a good job of seeing the other side of the net and mixing it up and when they were back on their heels she found it and dumped it over,” said Pickett. “Her and Zoe had a good connection tonight as well.”