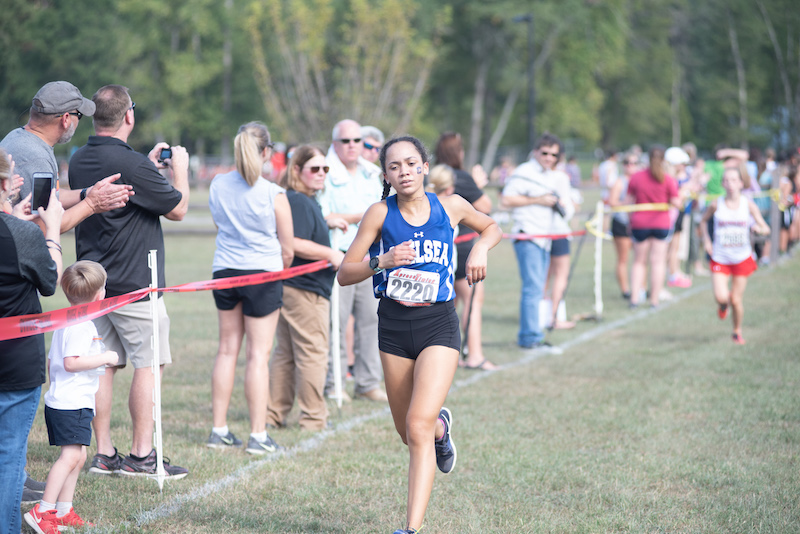 Chelsea's Teanna Cason was one of several girls' runners from Shelby County to perform well at the Jesse Owens Invitational. (Reporter photo/Keith McCoy)

OAKVILLE – What’s been an impressive cross country season for several local girls got even better on Saturday, Oct. 5, at the 2019 Jesse Owens Invitational held at Oakville Indian Mounds Park.

With the race featuring several different divisions, runners from Briarwood, Helena, Spain Park and Westminster at Oak Mountain were able to claim finishes inside the top 15 of their respective races, while several others also had impressive showings.

The highest county finish came in the silver division behind Westminster at Oak Mountain freshman Hannah Adams, who finished in second in the division with a time of 19:15.42.

While Adams had finished inside the top two of every event this season, including two victories, the time marked her fastest of the season by close to 21 seconds.

Porterfield finished with just her second sub-20 time of the season at 19:57.62, while adding her fourth top 10 of the season in as many events.

Culpepper, just a sophomore with the Jaguars, finished with her first sub-20 time of the season coming across the line with a time of 19:43.91. She has now finished inside the top seven for three consecutive events. Lidikay also posted her fastest time of the season at 20:02.26 and matched her highest finish of the season.

Finishing just one spot behind Lidikay was Helena’s Waters, who has had a remarkable season to this point. While the finish of 11th just missed out on a top 10 finish, she set a personal record with a time of 20:04.97. She has yet to finish lower than 21st in an event this season.

In the overall team standings of the silver division, Spain Park finished second and Westminster finished fifth in a race featuring 245 runners. Helena went on to finish in 13th.

Calera also had runners competing and saw Keely Rollf, Isabella Jones, Lamiya Campbell and Madison Denney all finish between 213th and 224th. All of those runners are sophomores are younger.

One of the toughest divisions of the race was the gold division, which featured several of the state’s top runners as well as some from outside the state.

Two of those runners were Thompson’s Emily Allen and Chelsea’s Teanna Cason.

Both set new personal records with their finishes. Cason finished in less than 20 minutes for the second time this season, while Allen did so for the first time this season.

The Briarwood Lions also had a strong showing in the bronze division with Adrienne Goolsby finishing inside the top 15 and Bella Doss and Morgan Harris both finished inside the top 50.

As a team, the Lions finished in seventh.