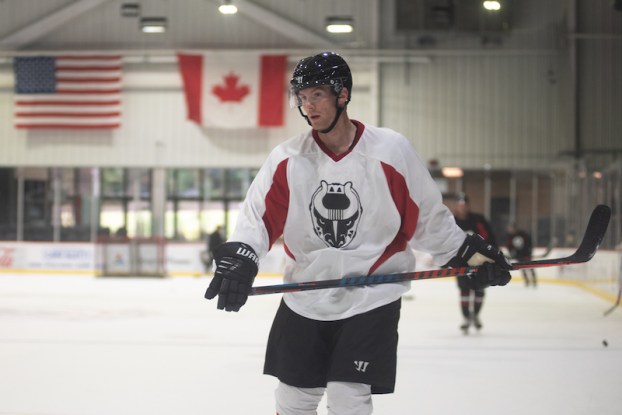 The Birmingham Bulls will kickoff the 2019-20 hockey season at home on Friday, Oct. 18, with a home matchup against rival Huntsville in a rematch of last year's championship series. (Reporter photo/Keith McCoy)

PELHAM – Just two years into a revived franchise and the Birmingham Bulls have already bulldozed their way into being a force in the Southern Professional Hockey League following a trip to the President’s Cup Finals this past season.

Year one was a branding and rebuilding year that saw the Bulls finish second to last in the league, but there was a vision from former President Art Clarkson and head coach Jamey Hicks. A year later, and the Bulls finished second in the regular-season standings and runner-up to rival Huntsville in the President’s Cup Finals.

Now, the Bulls are set to embark on a new journey with the 2019-20 season kicking off on Friday, Oct. 18, with a rematch against Huntsville, but this time, Clarkson won’t be there to watch for the first time in franchise history after passing away on Monday, Oct. 7.

“This will be the first game with the Bulls I’ve ever been associated with without Art being a part of it,” Hicks said. “It’s going to be real emotional for some of us. Going up against an in-state rival and in a rematch of last year’s finals, it’s almost going to be fitting.”

Hicks first met Clarkson in 1996 when he flew down to see the city to make the decision of whether or not to join the Bulls. He did, and while the team moved back to Canada just a few years later, Clarkson always imagined returning the Bulls to Birmingham.

When that day came in 2016, his first call was to Hicks to come back and run the team.

“Art asked me if I thought bringing hockey back would work and I told him yes because of the time it had been away and the success it had seen,” Hicks said. “That’s when he said, ‘Good, because you’re going to run it.’”

Clarkson didn’t have a backup plan. If Hicks didn’t want it and if the Bulls flopped it was going to happen with Hicks because that was his guy.

Now, going into year three, Hicks will continue to carry on Clarkson’s vision of Birmingham Bulls hockey and the team looks primed for another special season.

Highlighted by several talented returnees offensively, this year’s Bulls squad will look to build off of last year’s success, which wasn’t a surprise.

“We knew coming into this in year one that we were building a foundation and were built for year two,” Hicks said. “That foundation set is going to help some of the first-year guys this year.”

Possibly the biggest highlight of this year’s team, at least early in the season, will be the return of three forwards: Josh Harris, Mike Davis and Jacob Barber.

Harris was the MVP of the SPHL last season after finishing with the second highest point total in the league at 63, while finishing fourth in the league in goals with 25 which tied with Barber.

In addition to that, Harris posted 38 assists which was also a tie for fourth.

Barber also had a strong year by finishing 10th in points thanks to 24 assists on his stat line.

Those two guys will be two of the more dynamic offensive playmakers in the league this year, as long as they stay at the SPHL level and don’t get called up to a higher level of hockey.

Davis will also add a third playmaker to the forward position after finishing with 43 points last year behind 22 goals and 21 points.

“Those guys will be relied on heavily this year, especially early on while the young guys get their feet under them,” Hicks said. “It always helps having the MVP of the league on your team, while Barber and Davis are both consistent scorers for us.”

The Bulls will also benefit from the return of Austin Daae, who posted 17 goals and 17 assists for 34 points last year.

In addition to those four guys that will be back, several other newcomers are shining in camp and will be pushing to make the team over the final week of camp leading into the season.

The defense is where Birmingham is going to take the biggest hit this season, but there will still be plenty of talent this season.

One of the biggest blows will be the departure of Garrett Schmitz, who was one of the best players in the league last year as a rookie and player that earned a spot on the team through an open try out.

Among defenders in the SPHL last year, Schmitz had the third most points with 33 and third most goals with 10. He also added the sixth most assists with 23 and posted a plus-minus of plus-15.

He was also extremely clutch with four game-winning goals and five power play goals, while adding a relentless speed defensively.

They’ll also lose Caleb Apperson, who was a strong playmaker with 22 points and a plus-minus of plus-10.

But returning this year will be Matt Fuller, who posted 25 points for the Bulls and had a plus-minus of plus-17, which was the best mark on the team for a defender.

He’ll be joined by another veteran of the team in Mike Crocock, who was solid last year and will be a leader alongside Fuller early in the season because the rest of the defense will be full of young players looking to make a name for themselves.

The defense also won’t have the presence of Mavric Parks behind them, who won goaltender of the year in the SPHL last season after leading the league in wins with 30, while also posting a league high 1,200 saves. He ended the 2018-19 season with a goals against average of 2.28, which ranked fourth in the league.

Parks retired in the offseason and none of the team’s backups are back either.

During the week leading up to the season, Hicks is still searching for a starter and backup, but four guys are battling for the job right now between Carsen Chubak, Ian Milosz, Ryland Pashovitz and Artt Brey.

Chubak has been playing more at the professional level than the others, but has also been in and out of different leagues, including the East Coast Hockey League.

Brey spent the latter part of the 2018-19 season with the Adirondack Thunder in the ECHL and spent the four years before that at St. Lawrence University in Canton, New York.

Milsoz is a former member of the Boston College men’s hockey program where he played sparingly.

Pashovitz spent time as the goaltender for the Arizona State men’s hockey program where he had a strong career for the Sun Devils.

Those four will battle for the two roster spots ahead of opening night.

Following last year’s success, the Bulls are hoping to continue building success this season and that starts with three main points of emphasis according to Hicks.

Those three points are core values, continue building and then sustaining the success.

“We’ve had patience the last two years and believed in what we were trying to accomplish,” Hicks said. “We saw signs that first year going 15-3 in February and brought back a lot of guys for the first half of the second year, so we weren’t surprised by the success.”

Hicks said they didn’t expect an 11-0 start last year, but the foundation they had from year one to year one made that possible.

“All we are going to try and do is win every weekend,” he said. “That’s all we can focus on.”

Hicks said he is happy with what the team has built for the fans, especially for the ones that stuck through the first season struggles, and he hopes his team can continue to put on a show for the city again this year.

Birmingham will open the season on Friday, Oct. 18, with a home matchup against the Huntsville Havoc, which marks a rematch of last year’s SPHL Championship Series. Puck drop is scheduled for 7:30 p.m. at Pelham Civic Complex.