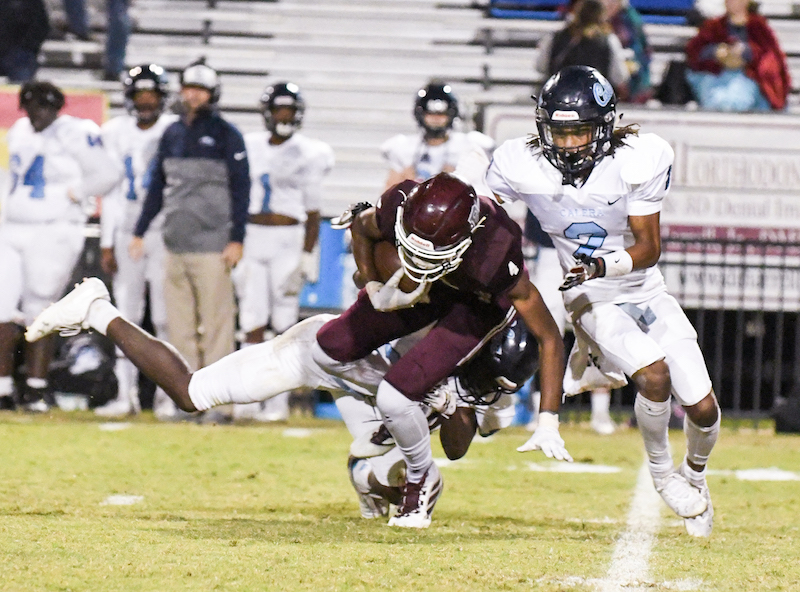 By LIZI ARBOGAST | Special to the Reporter

ALEXANDER CITY – Going into Friday night’s game, Hezekiah Hunter needed only 54 yards to surpass the century mark for Benjamin Russell’s football team. It seemed inevitable with two games left on the schedule, it wasn’t a matter of if he would get it but when.

As usual, Hunter answered the call. After busting a few short runs, he broke a 42-yard carry that officially put him over the 1,000-yard mark for the season.

“My O line helped me get there; everybody that blocked for me this season helped me get 1,000 yards,” Hunter said. “I feel really happy to get it because we haven’t had a running back to get over 1,000 yards in a while.”

Hunter is the first BRHS back to hit the milestone since 2015, and he kept it going all night. He finished with 148 rushing yards and four touchdowns despite not playing in the fourth quarter at all, and the Wildcats defeated Calera, 54-14, in Class 6A Region 3 action.

“He is consistent,” Benjamin Russell coach Kevin Smith said. “He’s always consistently going to give you that run when you need it. It’s always easy to call his name and probably something good to going to happen. And he gets stronger as the game goes on.”

Hunter said, “I saw that they opened up the middle. They had an outside linebacker that was out further their end, so that left me inside with one linebacker. I could just break the first tackle and get free.”
It didn’t look like it was going to be a walk in the park for Benjamin Russell (4-5, 1-4) especially early on. Calera (1-7, 0-5) went tit for tat with the Wildcats in the opening quarter.

After holding the Eagles off on their first drive, Benjamin Russell’s offense went to work as Carter Smith completed a short pass to Gavin Edwards, who bullied 32 yards into the end zone. But Calera immediately responded. The Eagles were aided by a pass interference call on third down, but they capitalized when they needed to as Ashton Shoddie scored from 11 yards out.

The teams again traded touchdowns on their next two possessions with Hunter scoring his first of the night then Shoddie answering after two long pass completions by Calera quarterback Tyler Nelson. The game was tied 14-14 and it was only midway through the first quarter.

From there, though, it was the Benjamin Russell show.

Hunter added two touchdowns of 25 and 3 yards in the second quarter to double up on Calera by the break, and it was the third quarter when Benjamin Russell really pulled away. It jumped all over Calera’s mistakes.

The defense got in on the scoring with a safety by Pokey Norris and Campbell Woods booted a 33-yard field goal. Then Calera started to make miscues. The Eagles fumbled the ensuing kickoff after Woods’ field goal and Edwards recovered it, setting up Hunter for a touchdown on the very next play.

Benjamin Russell’s defense held the Eagles to a three and out on their next drive and Calera muffed the punt and it was scooped up by the Wildcats at the 3, setting up yet another easy touchdown, this time by Brett Pitts.

“We answered when we needed to,” Smith said. “That’s been the thing all year. When we get gifts, we need to cash in and (Friday) we did a good job of cashing in our gifts. It takes the air out of the other sideline. We’ve been the recipient of that before so we know what it’s like.”

After the game was out of reach, Benjamin Russell’s youngsters went to work. The Wildcats finished one point shy of their season high, and Smith said it was nice to get back on the winning side of things.

“I thought we were on in the passing game and they were giving us some things,” Smith said. “The kids just played really well. We told this senior group before the game they had two more weeks to make some positive things go and I thought (Friday) was a step taken in that way.”