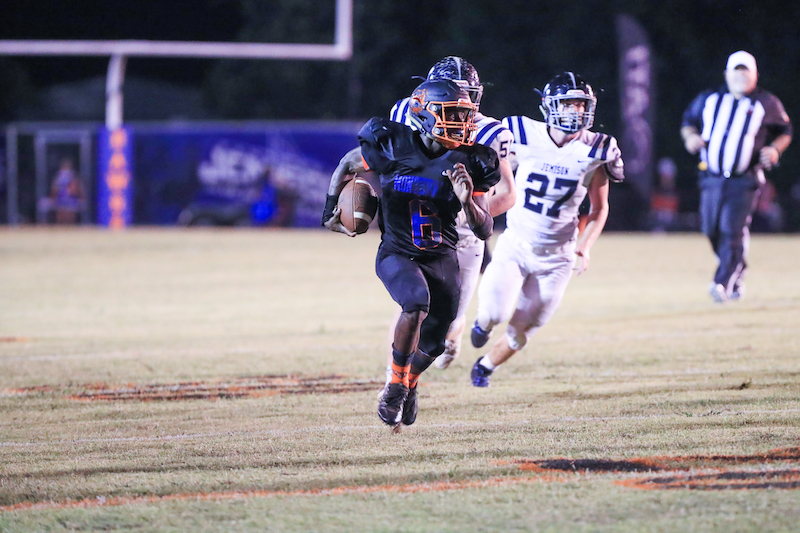 Deon Gilliland had a three-touchdown performance to lead the Montevallo Bulldogs to a six-point win on Thursday, Oct. 24. (File)

GREENSBORO – Despite trailing 20-8 early in the second half, the Montevallo Bulldogs were able to overcome some adversity in the biggest game of the year to pick up a crucial 32-26 victory over Greensboro on Thursday, Oct. 24.

In a game the Bulldogs had to win to claim the two-seed out of Class 4A, Region 3, they made big plays in the second half following an early third-quarter touchdown from the Raiders.

Trailing 14-8 at the break, Montevallo allowed a 40-yard touchdown pass five minutes into the third quarter to extend the deficit to 20-8. But the Bulldogs had a major response.

It started with a quick three-play response that saw quarterback Malik Inabinette connect with J.J. Evans for 55 yards, before Deon Gilliland ran the ball in from 3 yards out and posted the 2-point conversion.

But it was a deficit that was soon erased.

On the ensuing kickoff, Montevallo was able to catch Greensboro off guard with an onside kick that was recovered by Gilliland in a strong stretch of play for the senior running back. On the first play following that, Gilliland carried the ball 38 yards to the 2-yard line before finishing the drive with a 2-yard touchdown run.

After Joseph Anderson added the 2-point conversion, Montevallo had jumped in front 24-20 with 1:45 to play in the third quarter.

Greensboro went on to regain the lead three minutes into the final quarter on an 8-yard touchdown pass that put the Raiders on top 26-24 with 8:57 to play.

But Gilliland again came up big for his team.

After a strong drive, he was able to find some running room for a 14-yard touchdown that put the Bulldogs in front 32-26 with 6:18 left following a 2-point conversion from Evans.

With plenty of time left, however, the defense had to step up and make a stop. A unit that had struggled for the majority of the season but given up a combined 14 points the last two weeks, including a shutout last week, stepped up when Orlandis Weeks intercepted the ball to give it right back to Montevallo.

The Bulldogs were able to take advantage of that play by running the clock out to preserve the win.

Early in the game, Greensboro took a 14-0 lead behind an 11-yard touchdown pass and a 95-yard scoop and score.

Montevallo was able to add its first touchdown of the game on a 9-yard pass from Inabinette to Evans, but the Bulldogs had three first-and-goal opportunities in the half and only scored on one of them.

Inabinette finished the game 13-for-31 with 279 yards and one touchdown through the air. Evans was the top target with 128 receiving yards on seven receptions and Gilliland had 100-plus yards with three touchdowns.

Jayvion Seay and Weeks both had interceptions defensively.

Montevallo has now secured home field advantage in the first round of the playoffs, but still has one more road game against Lincoln on Friday, Nov. 1, before the postseason arrives.