Westminster headed back to Elite Eight 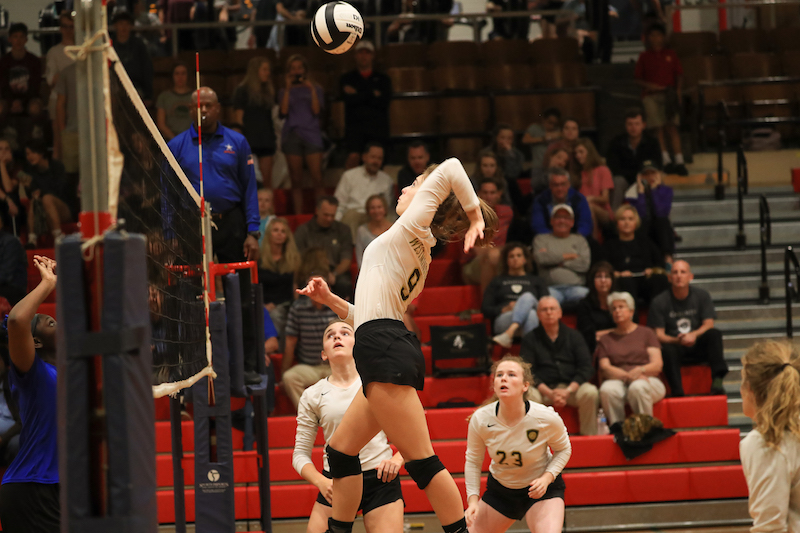 The Westminster at Oak Mountain Knights are headed back to the Elite Eight of the volleyball playoffs. (For the Reporter/Dawn Harrison)

MONTGOMERY – For the third year in a row, the Westminster at Oak Mountain Knights volleyball team will be going to the state tournament after picking up two wins on Thursday, Oct. 24, in the South Super Regional held at Montgomery’s Crampton Bowl MultiPlex.

Having fallen in the Elite Eight the last two seasons, the team’s main goal has been nothing short of a state championship and avenging those losses the last two years, which motivated the Knights in both matches standing in their way of another state tournament berth.

Westminster’s determination showed in the first set against Fruitdale. The Knights held serve the majority of the set and never allowed Fruitdale to get a chance at forming a rhythm as the Knights pulled away for a 25-3 first-set victory.

Up 1-0, the Knights had confidence coming off an easy win in the area championship two days earlier and now had a quick set win under their belts as well.

That created a major uphill battle for Fruitdale, and while they battled and kept it close for a while, Westminster’s talent was too much to overcome in a 25-10 win in the set.

Having put Fruitdale into a 2-0 hole and the position of needing to win three consecutive sets, the Knights didn’t let up in the third set with the determination to move on, which led to closing out the straight-set victory with a 25-14 win.

Coming off of that win, Westminster had even more confidence, but early in the Knights’ Sweet 16 matchup, it was almost as if they had too much confidence, which led Kinston not just starting out strong, but winning the opening set 25-22.

That was a wakeup call for the Knights, who quickly got to see how fast their goal for the season could be crushed.

Westminster came out in the second set and looked like the team that dominated all season long, winning the second set 25-13. The third set was closer, but this time around, it was the Knights who made plays late to pick up a 25-22 win.

Now up 2-1 and a set away from the Elite Eight, Westminster looked to be back in control and in a rhythm. Sniffing the state tournament, the Knights were able to make more late plays in a tightly contested set to pick up a 25-20 victory and a 3-1 win in the match.