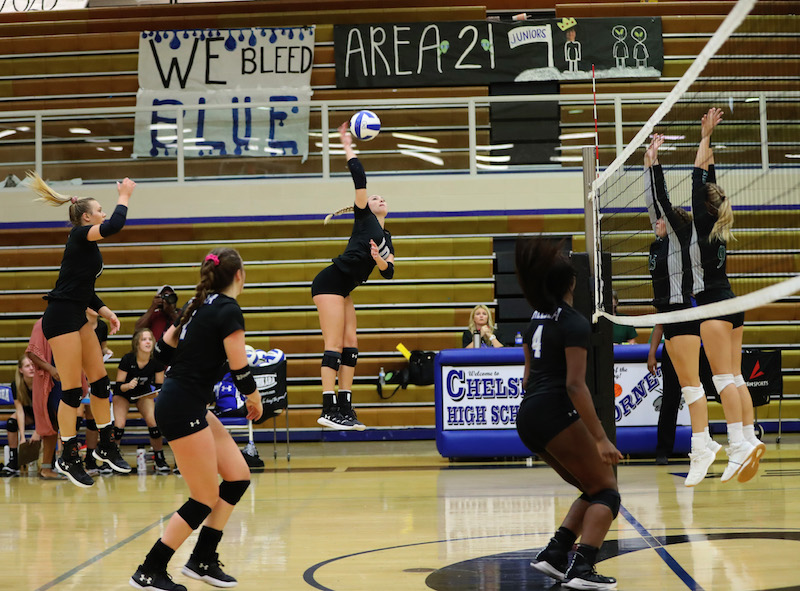 Chelsea, Pelham, Thompson and Westminster at Oak Mountain will all compete in their respective Elite Eight on Wednesday, Oct. 30. (For the Reporter/Cari Dean)

BIRMINGHAM – The 2019 volleyball season has featured several impressive stories, and four local teams are still hoping to add a fairytale ending at the 2019 state tournament.

Thompson, Chelsea, Pelham and Westminster at Oak Mountain will all travel to the Birmingham CrossPlex on Wednesday, Oct. 30, to compete in the Elite Eight of the state tournament, hoping to win three more matches to polish off state championship season.

A preview for each team is below. (All Wednesday games will take place at the Birmingham CrossPlex, while state championships on Thursday will be held at the attached Bill Harris Arena)

Just making it to this point in the season is a special accomplishment for the Thompson Warriors, who haven’t been to the state tournament since 2013. But the path to a state title is going to be a difficult one.

The Warriors will start the state tournament with their season on the line against No. 2 McGill-Toolen on Wednesday, Oct. 30, at 11 a.m. Thompson is the four seed out of the north, while McGill is the one seed of the south with a record of 34-8.

Should the Warriors get by the Yellow Jackets, they’ll meet either Baker or Bob Jones in the Final Four at 3:30 p.m. that same afternoon looking to advance to the state championship. It’s a tough slate to claim a title, but the Warriors seem to be playing their best volleyball at the right time of the year.

Chelsea’s path to a state championship may be the most difficult of anybody in any classification, but if there is a team that can pull it off, it’s the Hornets, who are hovering around the 50-win mark this season.

The Hornets will open their state tournament on Wednesday at 11 a.m. with a matchup against No. 3 Hartselle. The Tigers have won close to 60 matches this season and will be an extremely difficult opponent to start with.

Should Chelsea win that one, the Hornets would likely square off at 3:30 p.m. that same day against No. 1 Spanish Fort, who opens with Athens. Chelsea has met Spanish Fort twice this season, winning one of those matches 2-1 and dropping the other 3-0. That’s also the same team that ousted the Hornets last year in regionals.

The Class 6A State Championship is set to be held at 1:15 p.m. on Thursday.

Fellow Class 6A, Area 8 opponent Pelham will also have a difficult path to its third consecutive Final Four following a state championship two years ago and a loss to eventual state champion Spanish Fort in the Final Four last year.

The Panthers will start their state tournament against No. 2 Hazel Green at 9:30 a.m. on Wednesday. The Trojans were also in the Final Four a year ago and advanced to the state championship where they lost to Spanish Fort.

Should Pelham win that opener, the path may be slightly easier to get to the state championship with a matchup against either Northridge or Albertville at 3:30 p.m. that same afternoon. But both are those teams are ranked eighth and 10th, respectively, and won’t be an easy out either.

The Class 6A State Championship is set to be held at 1:15 p.m. on Thursday.

The Westminster at Oak Mountain Knights are extremely talented and as motivated as any team after losing in the first round of the state tournament the last two years, but to get past the first round this year, they’ll have to beat the No. 1 team in Class 1A.

Like the other three local teams in the tournament, Westminster’s path is a tough one, as the Knights will open with No. 1 Athens Bible at 12:30 p.m. on Wednesday.

Should the Knights win that matchup, they’ll likely be forced to square off against defending state champion Pleasant home in the Final Four at 5:30 p.m. that same day.