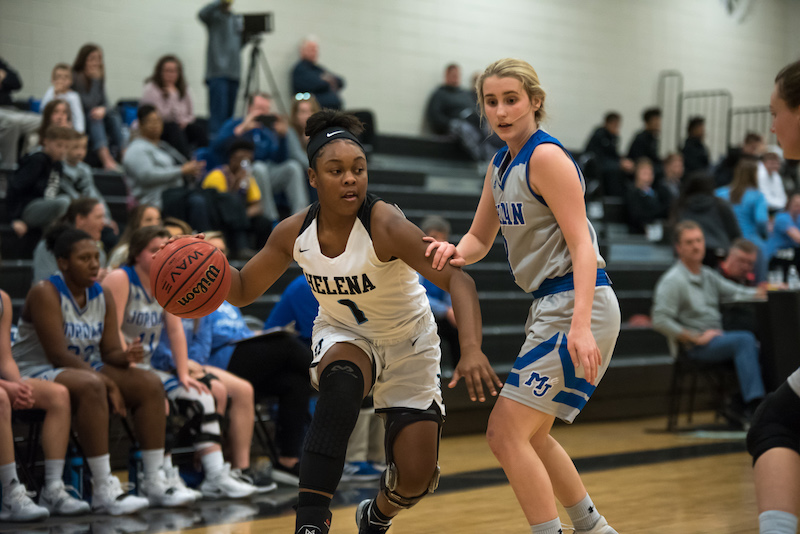 Helena will look to take advantage of a large junior class this season by playing their best basketball during area play. (File)

Last year was a tale of two halves for the Helena Huskies’ girls basketball team, who started out with a strong 9-4 record but then failed to win consecutive games after Christmas, which led to a 1-5 finish in area play and a one-and-done situation in the area tournament.

But, heading into the 2019-20 season, there is plenty of reason for optimism for head coach Alan Skinner and his large class of juniors that have a lot of experience.

“We’re excited. We have seven to eight players back this year,” Skinner said. “This group back has been playing with me since they got here, so they know what to expect, and most of them have varsity experience. We ended up pulling several younger ones up later in the season last year.”

The Huskies will lose Chloe Van Kovering, Julia Hensley and Melanie Wats, who were the three seniors, but they’ll return everybody else that was on last year’s team.

Two of those returning stars will be juniors Montana Harris and Kya Gardner. Harris was the leading scorer on last year’s team with 11 points per game, while she also averaged 5.8 rebounds per game. She attributes that level of play to the trust she has in her teammates.

“The trust is really high with our junior class,” Harris said. “I’ve played with one since fourth grade and the rest since sixth, so we have a special chemistry on the court and help get the best out of each other.”

“Kya had three or four games in second half of season where she had 18 or so points,” Skinner said. “We’re expecting her entire season to be more like that this year.”

Both Gardner and Harris were state champs in the 4X100-meter relay last spring and bring power and speed to the table, but those are just two of six juniors, while there will also be two seniors and a group of freshmen and sophomores.

“It’s a good group,” Skinner said. “They love each other but aren’t afraid to pick the pace up and let each other know what needs to happen to get better.”

The two seniors will be Brooklyn Oden and Hanna Tidwell, while the rest of the junior class will consist of Brianna Wilson, KK Busby and Jessica Powell.

One of the keys to success for the Huskies this season will be to focus on themselves as a team, while doing the little things better.

“We have to focus on what we do well,” Skinner said. “We got caught up in what others were doing well instead of what we do well last year. If we can focus on ourselves and work on fixing some of the small mistakes we made, we’ll instantly start to improve.”

Skinner said he’s already seen that improvement in limited practice time and there seems to be more eagerness from this year’s group.

One of the biggest changes for the team, however, will be the switch from man-press defense to a zone style of play.

“One of our strength’s will be defense,” Skinner said. “We’ll play zone and matchup. We’ve pressed since I’ve been here, so it will be new. We’re going away from that to condense the floor this year.

It’s a change from what I’m used to, but what I was used to didn’t work last year. We need to adapt and take advantage of our speed and running ability.”

He added the switch makes players responsible for 100 percent of their job as well as 10 percent of someone else’s job.

“It’s making me know where everybody is on the floor,” Gardner said. “You have to do that in zone instead of focusing on one person, which is helping us become better all-around players.”

And the Huskies will have that new defense tested early in the season. After starting off so strongly early in the season last year, but then fading, Skinner wanted to make the schedule tougher earlier this season to have the team prepared for a difficult area run in January.

“Last year we played our best basketball in December, so I tried to make sure we are challenged early this year,” he said. “We need to tighten things up and get better early, then peak at the right time.”

And with an area that features Calera, Chelsea and Pelham, all of whom had drastically improved seasons last year, clicking at the right time will be key in which one makes it to the postseason this year.

Helena will kick off the 2019-20 basketball season on Thursday, Nov. 7 at Central-Tuscaloosa in the Lady Falcon Classic where the Huskies will take on Linden.