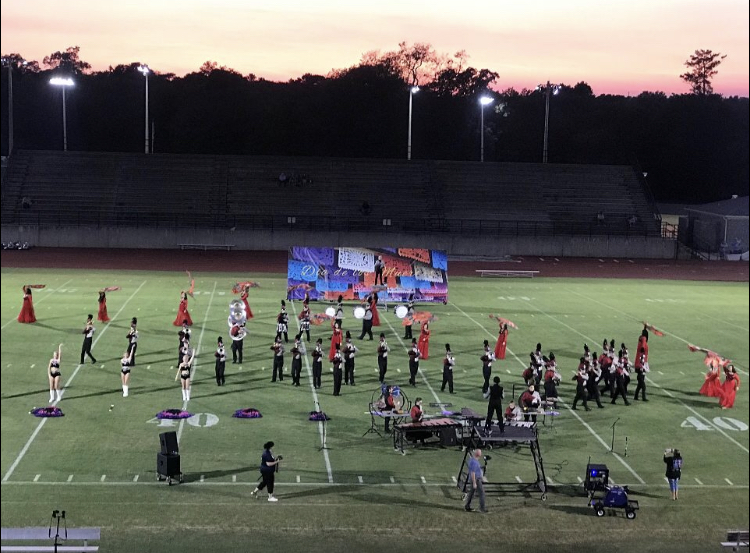 The Pride of Shelby County wowed fans this year with their homage to Dia de Los Muertos. (Contributed)

The Pride of Shelby County has finished its 2019 marching season with high scores and accolades that come with trophies.  The Shelby County High School Marching Band is in its second year with band director Matthew Martindale.

After an intense band camp schedule designed to make it easier to tolerate the summer heat, the members ranging from seventh grade to seniors managed to pull off a program that was a beautifully artistic homage to the Mexican celebration known as Dia de Los Muertos.
A show like the band has never done before, this program involved three musical movements that showcased four different soloists and elaborate pageantry the band not only learned to make precise, but that also had to coordinate with the Color Guard and Majorettes to create an overall performance that wowed crowds all season.
Through the course of the season, the band won straight superior ratings at each of the two competitions they attended.

Band captain and senior Victoria Snyder shared her thoughts about the program this year. “As a senior, this was the best season by far,” she said. “I am so proud of every single member and all of the work that we have put in. I will truly remember my time with the band for the rest of my life.”
But it wasn’t just the musicians that excelled at the competition; the Color Guard and the Majorettes both won Best in Class at the Lake Martin Invitational and the Pell City competition.

In fact, at the LMI competition, percussion, majorettes and guard all placed within the top five for the overall competition.
“I’m so proud of how hard these girls have worked and how they’ve matured as a team this year,” Majorette sponsor Cassie Kirkland said. “They put on a fantastic show every Friday night, and they reached their goal of winning Best in Class twice. I couldn’t have asked for a better group of young ladies.”

Marching season is drawing to a close. In fact, Nov. 1 will be their last marching performance.

The band hopes the community won’t forget about them. The need for support will continue throughout the entire year as they raise funds for new instruments that the organization needs in order to maintain and grow the program in the coming years.

The community can support the band by showing up to their biggest fundraiser yet on Nov. 16.

The Ford Drive 4 UR School Fundraiser will be held at the Quick Lane Tire and Auto Store in Calera next to Publix.

Each person who shows up to test drive a Ford will help the band earn $20.

They stand to earn a possible $6,000 if 300 people come out to do nothing more than test drive a new vehicle. No sales negotiation required or expected.

In addition, there will be another chance for one person to possibly win $10,000 from Ernest McCarty Ford.

Worried about missing a college football game? The boosters have already thought of that. There will be food trucks and TVs available so you won’t miss your team’s big game while you wait.