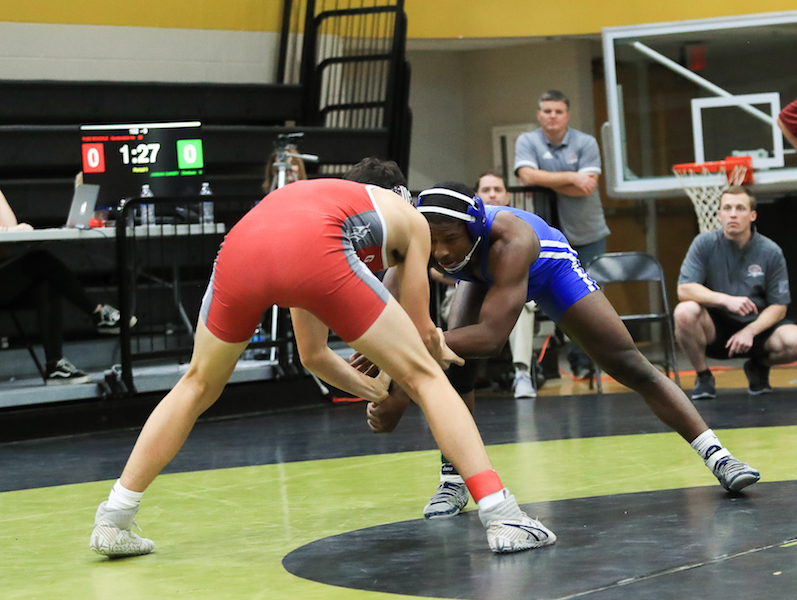 Chelsea beat Thompson at the 2019 Hornet Duals on Saturday, Dec. 16, while the Warriors won a tri-match over Chelsea a few days earlier. (For the Reporter/Dawn Harrison)

CHELSEA – On a collision course to meet in the finals of the 2019 Hornet Duals wrestling tournament, Chelsea and Thompson made easy work of their first few opponents before meeting in the championship match at Chelsea on Saturday, Dec. 16, where the Hornets pulled off an upset in their home event.

Thompson was without a few varsity wrestlers, making their run to the final match of the dual tournament special, but it was Chelsea that capitalized and pulled off a 45-35 victory.

In the championship match, Thompson was able to take the first two weight classes with pins. Yanni Vines and Cory Jones, wrestling in the 113 and 120 pound weight classes, respectively, both grabbed pins over Chelsea’s Bear Maxwell and Jacob Wheeler.

Byerman got a pin for six more points, while Stewart got a sudden death victory by a final of 13-11 in a tightly-contested matchup with Thompson’s Wilson Kennedy.

Tyler Lane (145) and Will Miller (152) both picked up big wins for the Warriors with Lane adding a pin and Miller posting a technical fall victory with a 17-2 win.

But from that point, Chelsea won five of the final seven weight classes.

Preston Royster and Connor Mims both picked up pins in their respective divisions. Royster won the 160-pound weight class with a pin, while Mims did the same in the 170-pound division.

Thompson’s Sasha Davison and Thomas Giere were the only other two victories for the Warriors, both via forfeit.

The Warriors, however, did beat Chelsea a few days earlier at full strength by a final of 66-13.

They also beat Tuscaloosa County on that same night in a tri-match for an area victory.

Against the Wildcats in that big area win, the Warriors pulled off a strong 55-21 showing against a good team. Thompson got pins from Vines, James Latona, Emmanuel Oliver, Miller, William Browder, Ethan Harrell, Michael Jackson and Giere.