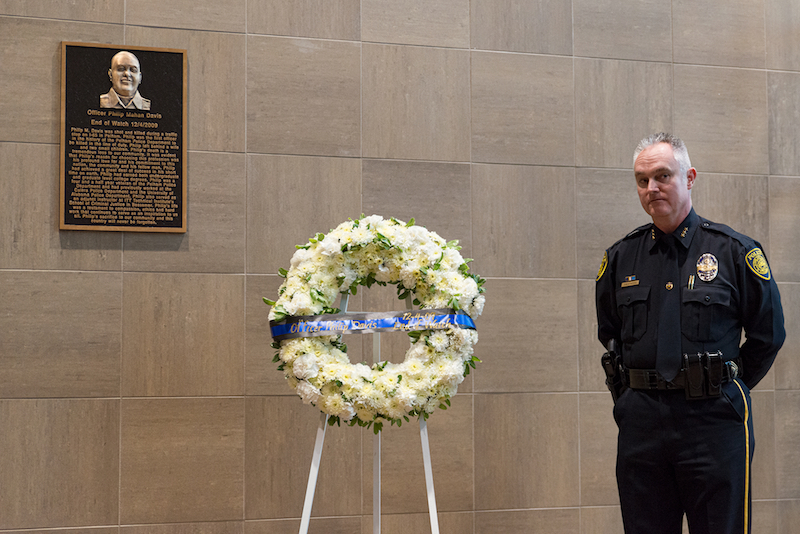 The city of Pelham appointed Pat Cheatwood to serve as the new chief of police, after he served the city in an interim role since June 24. (For the Reporter/Jeremy Raines)

PELHAM – After more than five months serving as the interim chief of police for the city of Pelham, Pat Cheatwood was officially appointed as the chief of police at the Pelham City Council Meeting on Monday, Dec. 16.

Cheatwood has been serving in the interim role since appointed on June 24, following the retirement of former Chief Larry Palmer.

In addition, he is a 19-year member of the department, served as an officer, sergeant and lieutenant with the city of Pelham before being appointed to one of two captain positions in 2017.

“I am deeply honored and grateful to have the opportunity to be Pelham’s next chief of police and would like to thank Mayor Gary Waters, City Manager Gretchen DiFante and our Pelham City Council for this opportunity,” Cheatwood said in a release.  “Pelham has been home for me and my family for over 19 years, and we have great people and wonderful employees in this city. Our police department is comprised of some of the hardest working men and women I’ve worked around in my 24 years of law enforcement. Our personnel care deeply about the people they serve, and they show that by their professionalism, dedication and generosity. I am honored to lead our team into the future.”

Pelham Mayor Gary Waters said Cheatwood represents the first and only Pelham police officer who has ever competed for the position of police chief. After a thorough national search process, Cheatwood was promoted to the permanent role of chief.

“I am proud of Pat Cheatwood and of the process he participated in to become Pelham’s next chief,” Mayor Gary Waters said. “We went in search of the best, and for the first time we didn’t just appoint the next person in line.  We are fortunate the best candidate was one of our own. Cheatwood displays the intelligence, initiative and integrity foundational to the leaders we are determined to hire across this organization.”

Pelham worked with the Center for Public Safety Management, an independent consulting firm that is the exclusive provider of public safety technical assistance for the International City/County Management Association. The city worked with CPSM’s chief selection process team which helped to review 26 qualified chief applicants after narrowing it down from 60 applications.

“Our internal selection team invited nine members of the Pelham community to undergo special training enabling them to serve as assessors and rate the final four candidates on their performance in three separate assessment centers,” Pelham Human Resources Director Tracy Hill said. “Our goal was to provide a fair and unbiased measuring tool from which the final selection team would gain knowledge and inform the selection process. The nine assessors came from a diverse group within the city.”

Renasant Bank’s Manager of Commercial Lending for Shelby County, Bill Keller, served as an assessor and said he enjoyed the process and would like to see more organizations use something similar.

The final selection team was made up of Waters, Hill, DiFante, Lt. Jason Myrick with the Shelby County Sheriff’s Department and Chief Ed Delmore from Gulf Shores.

“We are extremely grateful to Chief Delmore and Lieutenant Myrick as well as to Gulf Shores Mayor Robert Craft and Shelby County Sheriff John Samaniego for allowing Ed and Jason to participate,” DiFante said. “Delmore and Myrick provided excellent insight, and they were both tough interviewers. Through the entire process, we learned about things Pelham was doing right, and we also learned about areas where we may have become too comfortable with the status quo and need to make changes. We have shared this information with Chief Cheatwood, and we are all confident Pat is the right person to lead us into a future where we maintain our safe community and ensure those who aren’t interested in obeying our laws are encouraged to take that behavior somewhere else.”

Cheatwood holds a bachelor degree in criminal justice from Jacksonville State University and is a graduate of the 275th FBI National Academy in Quantico. Cheatwood begins his official police chief duties immediately and a swearing in ceremony is planned for after the New Year.