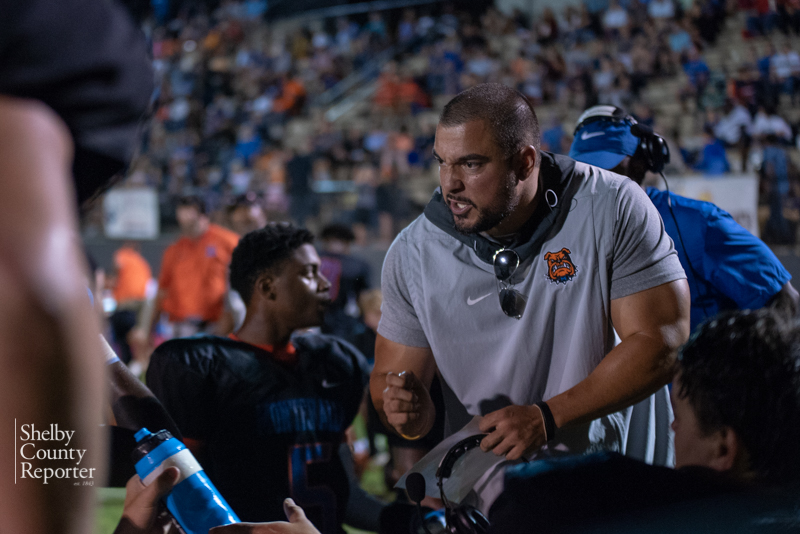 MONTEVALLO – After a four-year stint at Montevallo, head football coach Brandon Wilcox resigned on Friday, Dec. 20, following the Bulldogs’ 6-5 season that featured a difficult 20-18 loss in the first round of the playoffs.

In his four seasons with the Bulldogs, Wilcox put together a record of 28-16, which was the first winning record for a head coach at Montevallo since Charles Boren’s 28-22 record from 1998-2002.

Wilcox was also the school’s athletic director, which leaves the Bulldogs searching for a new football coach and athletic director moving forward, but the former coach is in good spirits about what’s ahead.

“I am so appreciative of my time at Montevallo,” Wilcox said. “I appreciate our administration and all of our faculty and staff for buying in to our program and being so supportive throughout my time here. Montevallo has a special community and the culture that we built over our time here is contagious.”

Coming to Montevallo, Wilcox had one goal in mind—creating a tradition of excellence and winning.

“I feel like we put Montevallo back on the map, and I’m excited to see the next group of Dawgs continue the tradition we built,” Wilcox said.

This past season, Montevallo brought a lot of potential back to its offense with one of the best quarterbacks in Malik Inabinette, Auburn commit J.J. Evans at receiver, a returning 1,000-yard running back in Deon Gilliland and a breakout star in Jamarius Carter.

But the Bulldogs also had a completely new defensive side of the football and a new offensive line blocking for all of that talent. That combined with injuries throughout the season led to some inconsistent play at times, but also led to some special coaching through turmoil.

Over the last two years, Montevallo has scored a total of 865 points for an average of 39.3 points per game, giving the Bulldogs one of the best offenses in the state over that span.

In 2018, Wilcox led Montevallo to a 9-2 overall record, including a 9-1 regular season. That put the Bulldogs one win shy of just their fourth 10-win season in school history.

In his first year at the helm, however, he was able to lead Montevallo to its third 10-win season in school history, posting an overall record of 10-2 with a berth in the second round of the playoffs.

His second season featured a 3-7 season with a turnover in talent, but the next two years saw Wilcox lead the Bulldogs to back-to-back playoff appearances with a combined record of 15-7 before resigning.

Wilcox finished his Montevallo coaching career with a region record of 15-9, the second best mark of any coach in school history, while posting a 1-3 record in the postseason.

Following that success, he couldn’t be more thankful for what the players did during his time.

“I will always be indebted to our players and all the hard work they put into our program,” he said. “I learned a long time ago that we as coaches are only as successful as our players allow us to be.”

Wilcox doesn’t know what’s ahead for him, but says excited for whatever opportunities God brings his way.

“I preach daily to our players to get comfortable being uncomfortable, and now it is my time to walk the walk,” Wilcox said. “I look forward to creating great relationships with a new community and building a championship program.”