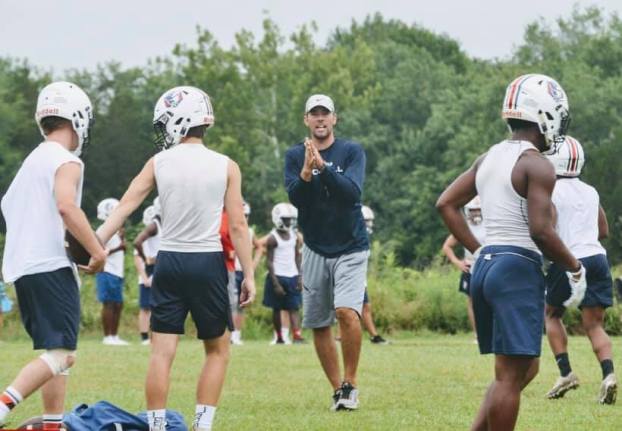 Blake Boren, above, has been named Montevallo's next head football coach after serving as offensive coordinator at Mountain Brook and Pike Road the last two seasons, respectively.

MONTEVALLO – Montevallo High School was quick to fill the vacant head coaching job for the Bulldogs’ football after former head coach Brandon Wilcox resigned from his coaching duties back in December.

On Thursday, Jan. 16, the position was filled when Blake Boren was officially approved by the Shelby County Board of Education at a regularly scheduled meeting.

Boren will take over as Montevallo’s next head coach after serving as offensive coordinator at several different locations over the past 10 years, including the collegiate level.

Most recently, Boren was the offensive coordinator at Pike Road High School during the 2019 season where his offense set a new team record with 515 points, as the Patriots went on to finish the regular season 10-0.

Eventually, the advanced to the second round of the playoffs before losing to Mobile Christian, who made it to the Class 3A State Championship game.

Pike finished the 2019 season at 11-1 overall and scored 35 or more points in every game but that loss to Mobile Christian, which led to an average of 42.9 points per game.

Prior to joining Pike Road, Boren was the offensive coordinator at Mountain Brook High School in 2018 where his offense averaged 25 points per game and scored 30 or more points in five of 12 games in the toughest region of high school football in the state.

In addition to that experience, Boren was also an assistant coach at Faulkner University from 2012-18. At Faulkner, he spent time as offensive coordinator, wide receivers coach and recruiting coordinator, before diving back into the high school ranks.

His start in coaching came in 2009 when he joined perennial state power Hoover. Boren spent the 2009 and 2010 seasons with the Buccaneers before then moving to Mississippi to take over his first offensive coordinator gig at Newton County High School.

That kick started his coaching career as an assistant, and now, he’ll get his first crack at being a head coach when he leads the Bulldogs during the 2020 football season.

Boren will be joined by his wife Amanda and three kids Logan, Brayden and Conner.

He is also the son of former Montevallo head coach Charlie Boren, who coached the Bulldogs from 1998-2002. In his time leading MHS, Charlie Boren posted an overall record of 28-22 with a 1-1 playoff record.

Montevallo has posted a winning season in four of the last five seasons, and that’s something Blake Boren will look to continue during his stint.