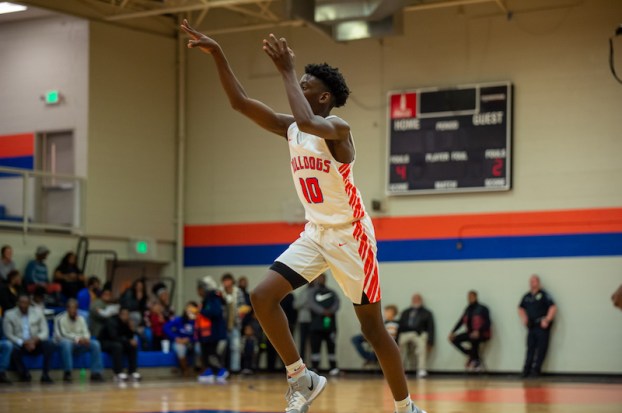 Montevallo’s Michael Jones, above, posted 22 points to lead the Bulldogs to a win over Childersburg. (For the Reporter/Larry Dancy)

Montevallo improves to 6-0 in area play

MONTEVALLO – The Montevallo Bulldogs continued their impressive run on Thursday, Jan. 16, with a strong showing at home against area foe Childersburg.

The Bulldogs used an impressive second half on the defensive end of the floor to pull away for a 73-59 victory, which improved their overall record to 16-5 and their area record to a perfect 6-0.

Early in the game, Montevallo’s offense showed up ready to play, but the defense lagged behind.

In the first few minutes of the opening quarter, the defense played well enough to help the Bulldogs pull in front by 10 points quickly, but after that, the Tigers made a strong run.

Montevallo’s offense posted its first of two straight 23-point quarters, but Childersburg wasn’t too far behind with 17 points to remain in close contact at the end of the opening frame.

With the Tigers starting to find their stride on the offensive end late in the first quarter, they were able to carry that momentum into the second quarter.

That led to a 25-point period in the second, which was the highest quarter point total for either team in the game.

The positive, however, for Montevallo continued to be its offensive firepower. The Bulldogs posted 23 points yet again, which kept Childersburg from making up too much ground.

With Montevallo’s offense playing so well, the Bulldogs were able to hold a slim 46-42 lead at the break.

During the halftime break, however, both teams drew up a game plan to help their defenses improve over the final 16 minutes. While it worked for both teams, it worked slightly better for Montevallo, who was able to take advantage of playing with the lead.

Montevallo’s defense went from giving up 25 points in the second quarter to almost 20 points less in the third quarter by limiting the Tigers to seven points.

While the Bulldogs’ offense took a hit as well, they still posted 13 points, which was more than enough to extend the lead to 10 points at 59-49 heading to the final quarter.

And with that lead being extended, Montevallo was able to play a little more conservative in the final quarter. That helped limit opportunities for Childersburg’s offense, as the Tigers only scored 10 more points, while the Bulldogs continued an efficient night offensively to post 14 more points and close out the 14-point win.

In addition to that, two players posted double-double performances for the Bulldogs. Jabrian Sullens had 14 points and a remarkable 19 rebounds, as well as three blocks, while Jamarius Carter posted 20 points and 10 rebounds. Kavounte Britton added one more double-figure scorer with 10 points and four assists.