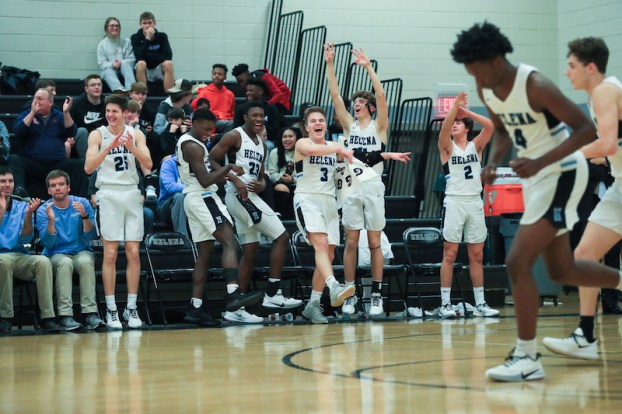 Helena defeated Chelsea 65-60 on Friday, Jan. 24 to finish undefeated in Class 6A Region 8 play. (For the Reporter/Dawn Harrison)

CHELSEA – The Helena Huskies will finish the 2019-20 regular season undefeated in Class 6A Region 8 play after defeating Chelsea 65-60 on the road on Friday, Jan. 24.

Helena, who already locked up the top seed for the area tournament after defeating Pelham on Jan. 21, will finish 6-0 in a region that features the Huskies, Pelham, Chelsea and Calera.

As for the game against Chelsea, Helena was able to hit several clutch free throws in the final quarter and used a balanced scoring attack to take down the Hornets.

Helena had four players finish in double figures scoring as Daunte Cave led all scorers with 19 points, Caden Pierce and Brody Moss each finished with 11 points and Andrew Fortson chipped in with 10 points.

For Chelsea, Caleb Moore finished as the Hornets’ leading scorer with 17 points and Andrew Messier and Jacob Tierney each finished with 13 points.

Helena led Chelsea for three quarters as they held a 30-23 halftime lead and a 46-39 lead going into the fourth quarter. A big difference in the game came at the foul line, as the Huskies got to the line 30 times compared to just 16 times for Chelsea.

As a team, Helena converted 22-of-30 free throws to finish 73 percent in the game.

The Huskies also made nine 3-pointers in the game as seven of them came in the first half. Pierce had the most after making three in the first quarter.

Helena will take on Thompson and Oak Mountain to close out the regular season before hosting the area tournament the week of Feb. 3.

By GRAHAM BROOKS / Staff Writer HELENA – It was a special senior night for Helena guard Caden Pierce, who... read more