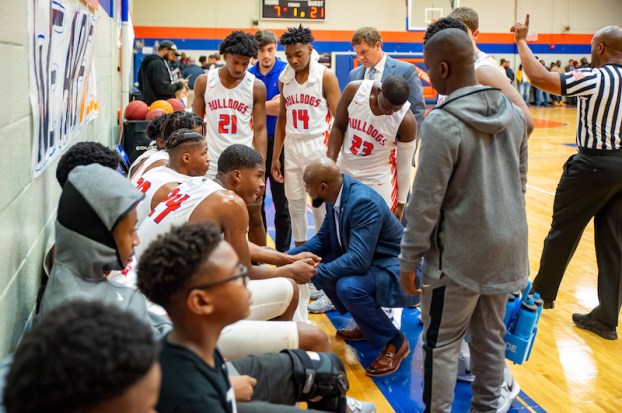 The Montevallo Bulldogs will host the area tournament after finishing area play with a perfect 8-0 record and winning their last 14 games in a row to end the regular season. (File)

CHILDERSBURG – The Montevallo Bulldogs overcame a slow start on Tuesday, Jan. 28, to pick up their 14th consecutive win and close out area play a perfect 8-0.

On the road against area foe Childersburg, the Tigers were the only team preventing the Bulldogs from a perfect record in area play. Montevallo quickly fell behind by 19 points in the second quarter, but overcame the large deficit by closing the period on a 12-0 run, before then continuing that momentum into the second half for a thrilling 57-55 victory.

With the win, Montevallo improved to 21-6 overall and completed area play a perfect 8-0, as the Bulldogs will now host the area tournament during the week of Feb. 3.

Early in the game against Childersburg, Montevallo struggled on both ends of the floor. Whether it be the pressure of continuing the win streak or finishing area play undefeated, a team that normally has a high-powered offense and a good defense couldn’t catch a break on either end.

The Tigers took full advantage and stormed out to an 18-7 lead at the end of the opening quarter and carried that momentum into the second period. After eventually falling behind by 19 points early in the frame, Montevallo needed a big answer, not just to keep the win streak alive, but not lose momentum ahead of the area tournament.

The Bulldogs did just that by answering back with a 12-0 run to end the second quarter, which cut the deficit to seven points heading into the halftime break after they outscored Childersburg 16-12 in the period.

With that shift in momentum, head coach Greg Dickinson was able to build off of it during the break to help his team’s sense of belief.

That led to Montevallo’s best offensive quarter of the game in the third quarter with 18 points, but Childersburg’s offense also continued to shine with 14 more points.

Scoring those 14 points were key for the Tigers because it kept them in front by three points at 44-41 going to the fourth.

But momentum was fully in Montevallo’s corner at that point. The Bulldogs had found an offensive rhythm with at least 16 points in each of the last two quarters, and they continued it in the final period with 16 more points.

That didn’t keep the finish from being dramatic, however, as they had to overcome a three-point deficit. But defensively, Montevallo saved its best quarter for last.

The Bulldogs allowed just 11 points in the period, which became just enough to complete the thrilling comeback victory.

By ALEC ETHEREDGE | Managing Editor BIRMINGHAM – With 3:11 left in the second half of a game against Altamont, Morgan... read more