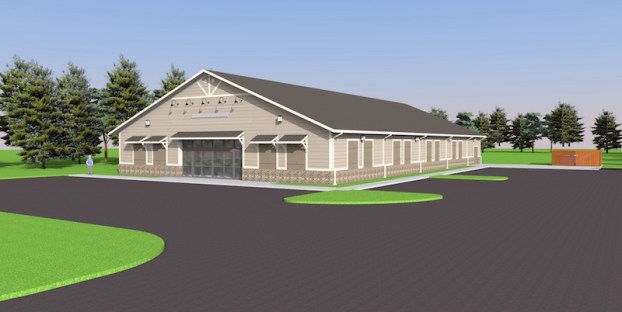 This rendering shows the Dollar General store proposed for property along Alabama 119 in Montevallo. (Contributed)

MONTEVALLO – Mayor Hollie Cost gave an update on a new business proposed for development that has garnered much feedback from the city’s residents recently.

Cost said Dollar General is interested in locating a store on Alabama 119, diagonally across from the American Village in the city’s Scenic Corridor Overlay district.

“They chose this location on their own and for their own reasons,” Cost said, adding the property is in Montevallo’s Neighborhood Business Special District zoning as designated on the city’s most recent zoning map adopted in 2012. “This is a permitted use. We as a city do not have the power or the right to pick and choose which businesses may or may not legally operate here.”

Cost said to “down-zone” property, or change it from one zoning designation to another—for example, commercial to residential)—would take away part of its value and could result in legal ramifications for the city.

The Design Review Committee will consider the aesthetics and if they fit into the character of the district—and, if appropriate, make recommendations—before approving the plans.

The next step will be setting a hearing date for the site plan review before the Planning Commission, and then another public hearing will be scheduled before the City Council.

“It is a lengthy process,” City Clerk and Treasurer Herman Lehman said. “However, that is the way it was established in order to give the public multiple opportunities to provide input on the proposed development.”

The next Design Review Committee is scheduled for Tuesday, Feb. 11 at 3 p.m. at Montevallo City Hall.

By GRAHAM BROOKS / Staff Writer HELENA – Students at Helena High School got plenty of strong advice from the... read more