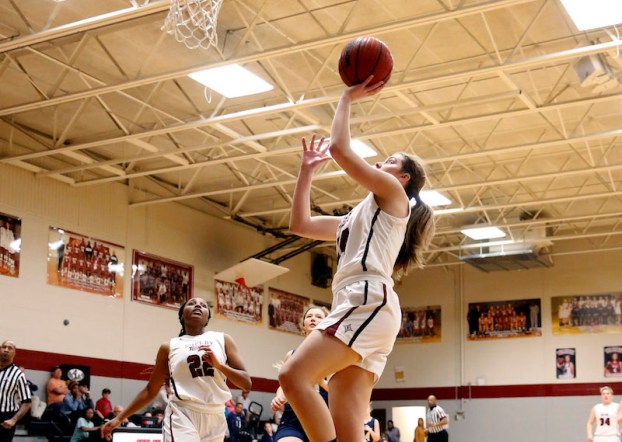 Shelby County downed Jemison by 70 points on Monday, Feb. 3, to clinch a spot in the area tournament championship and the sub-regional round of playoffs. (For the Reporter/Brandon Sumrall)

COLUMBIANA – The Shelby County Wildcats cruised through the opening round of the AHSAA Class 5A, Area 6 tournament behind a dominant 91-21 win over the visiting Jemison Panthers on Monday, Feb. 3.

It was a strong start to the postseason for the Wildcats, who are on a redemption path after advancing to the Sweet 16 the last three years, but never advancing past the Elite Eight in any of those seasons.

Now, Shelby County is just one win away in the super regionals from advancing to the Sweet 16 for the fourth consecutive season.

The Wildcats (23-4, 7-0) wasted little time during the opening period showing their offensive fire power as 11 points from Maggie West along with eight from Skye Knighten-Lilly propelled Shelby County to a commanding 39-4 lead after one period of play.

Ashlee Hilyer started the second with a three for the Panthers and later added another for Jemison, but with Aaliyah Cotton pacing the Wildcats with 10 points in the period, including a pair from downtown, Shelby County went to the locker room for the halftime break with a commanding 60-15 lead.

Baskets by Haileigh Greer and Jaclyn Lowery were all the points for Jemison during the third, while seven from Lilly and four from West propelled Shelby County in outscoring the Panthers 23-4 in the period, while taking an 83-19 lead to the final period.

With both teams subbing deep into their bench during the final period, six points by Maleah Hale set the pace for the Wildcats through the fourth period as Shelby County would cruise to a 91-21 victory over the Panthers.

Cotton lead the Wildcats with 23 points, four rebounds and four steals, while Hilyer lead the Panthers with eight points and two steals.

Drawing up a plan: Shoot 2 Change continues a special cause

By ALEC ETHEREDGE | Managing Editor With fans cheering loudly to his left and right, Parker Powell stood next to... read more