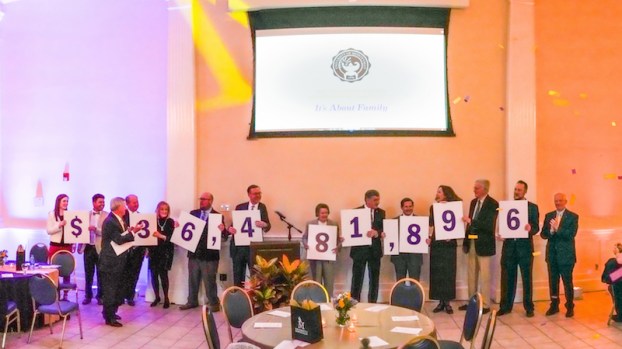 University of Montevallo students, leaders and supporters unveil the total amount raised through the “It’s About Family” campaign during a Feb. 7 ceremony on campus. (Contributed)

The University of Montevallo raised nearly $36.5 million over the past seven years to benefit scholarships, campus improvements, faculty development and more through the “It’s About Family” campaign.

The announcement came during a Feb. 7 ceremony on campus, during which students, alumni, faculty and leaders celebrated nearly doubling the campaign’s original goal.

“Today, we are recipients of great gifts from many, many great people. This campaign was successful because people who love the University of Montevallo want to see it continue to thrive well into the future,” said UM Board of Trustees Chairman Todd Strange. “We want to make sure this university commands attention from great students who want to come here to learn, grow and develop.”

The University launched the campaign in 2012 with the goal of raising $20 million by 2019. The original goal was reached in only five years, making it the most successful fundraising effort to date at that time. But that wasn’t the end. Building on the success of the original goal, the UM Board of Trustees announced in February 2018 that they were extending the goal to $30 million.

The University’s Traditions Fund also greatly benefited from the campaign, meaning treasured traditions such as College Night, Founders’ Day, the brick-lined campus and the Alabamian student newspaper will continue to thrive well into the future.

“One of the things that is so special about the University of Montevallo is how much the students know they are cared for,” said UM senior and SGA President Olivia Eldridge. “I’ve never seen anything like it.”

Some of the new facilities and renovations that have been possible through the campaign include: