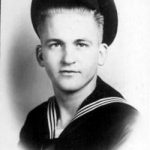 “The American Village is pleased to join the Shelby County Reporter in recognizing Navy Veteran Newton Columbus Thrasher, Jr. as Veteran of the Week,” American Village founder and CEO Tom Walker said. “He is representative of the hundreds of thousands of Alabamians who have risked it all for the sake of our country and its freedom. To all veterans we owe a debt we can never fully repay.”

Newton Columbus Thrasher Jr. was born Feb. 14, 1925 in Morgan County, Alabama. The oldest of five children born to Newton Columbus Thrasher Sr. and Clara Pickens Thrasher, he resided in Morgan County (Hartselle and Decatur) his entire life, outside of his enlisted years. Just prior to graduating from high school, Newton enlisted in the U.S. Navy on May 6, 1943, serving as an Aviation Metalsmith (Second Class) in Adak, Alaska, repairing aircraft that were involved in battle in the Pacific Theater during World War II. After being honorably discharged on March 8, 1946, he returned home to complete high school and then trade school as a refrigeration mechanic. He was a patriotic American war veteran who proudly displayed the flag at his home. After his retirement from Central Bank, his interests included church activities, spending time with family, aviation and computers.