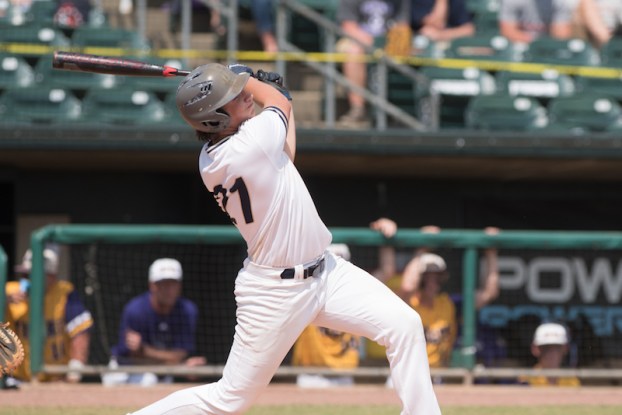 Briarwood opened the 2020 baseball season with a 10-7 win over Vestavia Hills behind a grand slam from Carson McKinney. (File)

VESTAVIA – Following last year’s trip to the Class 5A State Championship series, and coming within a game of winning the title, the Briarwood Lions headed into the 2020 season not only hoping to duplicate that success but also with a chip on their shoulder after coming up short of their goal.

And in game one of the new season, the Lions showed they’ll be a tough team to deal with again this season after taking down Class 7A Vestavia Hills 10-7 on opening night at Briarwood Christian School on Monday, Feb. 17.

After both the Lions and Rebels went down in order in the first inning, Briarwood came back to the plate in the top of the second ready to strike.

The Lions also got help from Vestavia’s pitching, as four of five batters in a row were hit by a pitch with the other batter drawing a walk. That in itself led to two runs for Briarwood.

Then, after the first out was recorded, Eli Steadman and Carson McKinney drove home three combined runs with doubles, while Wesley Helms hit an RBI sac fly.

After all of that damage, the Lions were able to take a 6-0 advantage.

Vestavia finally cracked into the score column in the bottom of the third with an RBI single and one run walked in, but the Lions still held a 6-2 advantage.

The Rebels, however, continued chipping away at Briarwood’s lead in the bottom of the fifth when an error allowed two runs to score and bring them within two runs at 6-4.

But in the top of the sixth, the Lions came back with an immediate answer, and it was a big one.

After three consecutive walks to start the inning, Helms popped out to put an out on the board, but McKinney stepped to the plate one batter later and set in for a battle.

In a 3-1 hitter’s count, McKinney took the next pitch he saw and bombed it deep over the left field wall for a grand slam that put the Lions on top 10-4 and became the major difference in the final score.

That home run became huge in the bottom half of the final inning because Vestavia found a way to bring home three runs. Had it not been for McKinney’s homer, the Rebels would have picked up a 7-6 win.

Instead, it was the Lions who walked away victorious on opening night with a 10-7 victory.

McKinney finished 2-for-5 with five RBIs and one run scored. In addition to him, Steadman and Blake Mckenna each picked up one hit.

By ALEC ETHEREDGE | Managing Editor MONTGOMERY – While it didn’t come to an end the way they had hoped,... read more