Leigh Gwathney has been confirmed by the Alabama State Senate as Chair of the Alabama Board of Pardons and Paroles. 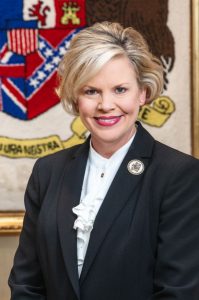 Gwathney was appointed to the position by Gov. Kay Ivey and has been leading the board since parole hearings resumed on Nov. 5, 2019.

“I am humbled and thankful for the trust placed in me by Gov. Ivey, the Alabama State Senate, and the citizens of Alabama,” Gwathney said. “I look forward to continuing to serve the State of Alabama each day by ensuring a fair process for all who appear before the Board of Pardons and Paroles and protecting public safety for all Alabamians.”

Gwathney was serving as assistant attorney general in the Alabama Office of the Attorney General when she was appointed to the board. She was the senior prosecutor responsible for prosecuting violent crimes throughout the state. Additionally, she was the senior cold case prosecutor overseeing homicides and sexual assault cases across the state and was responsible for reviewing legislation and amendments to the Code of Alabama.

MONTGOMERY – A Birmingham woman sentenced to prison for a 2007 robbery in Shelby is scheduled to receive a parole... read more