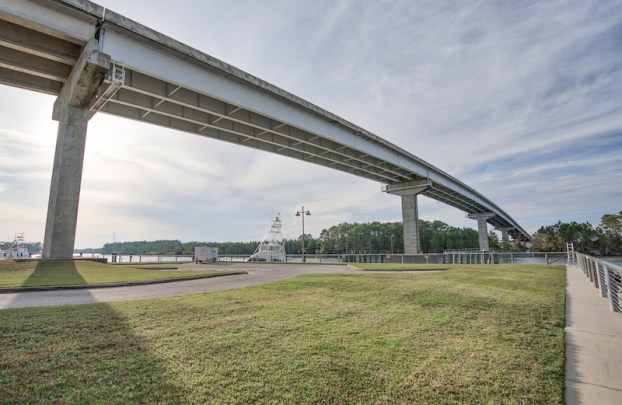 The proposed Coosa River Express toll bridge would measure 1,600 feet in length and would extend over Lay Lake, connecting Shelby and Talladega counties at Shelby County 28 at Perkins Landing on the Shelby County side. (Contributed/Tim James Inc.)

COLUMBIANA – A public involvement meeting about a proposed toll bridge project in Shelby and Talladega counties drew hundreds of people to the Shelby County Arts Center’s Grande Hall on the night of Tuesday, Feb. 18.

In a three-hour timeframe, an estimated 500 people attended the come-and-go-style meeting, where documents provided by the proposed project’s private developer, Tim James of Tim James Inc., were displayed for viewing and public comment forms were available for attendees to complete and submit on-site.

The proposed 1,600-foot-long bridge, called the Coosa River Express, would extend over Lay Lake and connect Shelby and Talladega counties at Shelby County 28 at Perkins Landing on the Shelby County side of the river.

According to James, the privately funded project—estimated to cost between $30 million and $40 million—would involve the construction of the bridge, four to five miles of new roadways and improvements to existing roadways. It would also entail the construction of a roundabout where East College Street meets Shelby County 28 near Shelby County High School in Columbiana.

The proposal has elicited a mixture of negative and positive feedback from Shelby County residents, many of whom attended the meeting and voiced their opinions on the project’s potential impacts. 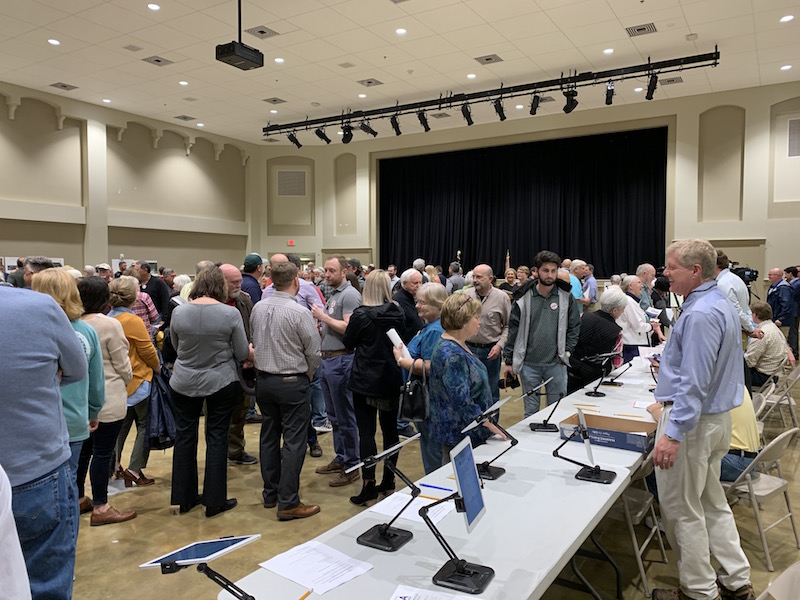 “As director of Shelby Iron Works Park, I worry about the increase of traffic and what it will do to the park,” Maier said. “I’d like to know more about the proposal.”

Long-time Columbiana resident Aubri McClendon said she and many others who live in Perkins Landing, near where the proposed bridge would land on the Shelby County side of the river, are opposed to the project.

McClendon said more than 1,500 signatures of residents in Shelby and Talladega counties who are against the proposed bridge have been collected via petitions in recent weeks.

“I feel like doing business with Tim James is bad business,” McClendon said. “He does not care about this community.”

Lay Lake resident Judy Jones does trash cleanup for the lake and said much of the trash she collects is roadside debris, something she worries will increase if more traffic comes through the area.

Shelby Shores resident Sharon Pope expressed concerns about the county eventually having to absorb tax increases related to the proposed bridge, and Sherry Ammons questioned whether the area would receive more fire and police protection.

Coosa Riverkeeper representatives distributed information at the meeting detailing the reasons behind the organization’s opposition to the proposed bridge.

“The environmental impact of the construction of the toll bridge itself is in need of careful consideration,” the information sheet read. “No such commitment or documents have been shared with us or the public.”

According to Coosa Riverkeeper, Lay Lake is listed as impaired by the Alabama Department of Environmental Management on the most recent 303(d) list for PCBs, which are defined as legacy pollutants that don’t readily break down in the environment and accumulate in sediment.

“The construction of this bridge will ultimately stir up the sediment of the river bottom, which might stir up any PCBs that might be present,” the sheet read. “These impacts would not only impact aquatic wildlife, but will also impact folks who enjoy the lake.”

On the other side of the aisle, residents like Sarah and Edwin Atchison are proponents of the project, particularly the proposed road improvements in Shelby County.

“I see it as progress, and with the road system, I think it’s going to be moving forward,” Sarah Atchison said. “That’s the best thing I heard about it. This is past due, and I think it’s a good thing.”

Edwin Atchison said the new roundabout that Tim James Inc. has proposed in Columbiana as part of the project would be a big improvement, too.

Columbiana resident Richard Glasgow said he is in favor of the project because the bridge will make his drive to timber property he owns in Coosa County easier.

“The bridge would cut at least 20 minutes off my travel time,” Glasgow said.

“We’re not selling out, and we’re not moving,” Lee Bryant said after a presentation Tim James Inc. hosted in Columbiana earlier this month. “If a bridge is coming, we would rather it be a private toll bridge because it will force traffic to slow down.”

James said Tim James Inc. has entered into a contract with Auburn University to do a full economic impact study on the proposed project.

Tim James Jr., the company’s vice president, said the proposed route improvements would bring more people through areas like Columbiana, where they could spend money at local businesses.

Shelby County Manager Chad Scroggins said on Feb. 19 that the Shelby County Commission has not set a date on when the proposed Coosa River Express project will be considered for a vote.

To view the developer’s project documents, go to ShelbyAL.com/DocumentCenter/Index/318.

Comments regarding the proposed project can be sent through the online comments form at ProposedTollBridge.shelbyal.com.

By NATHAN HOWELL | Special to the Reporter HELENA – On Feb. 19 the First Baptist Church of Helena held... read more