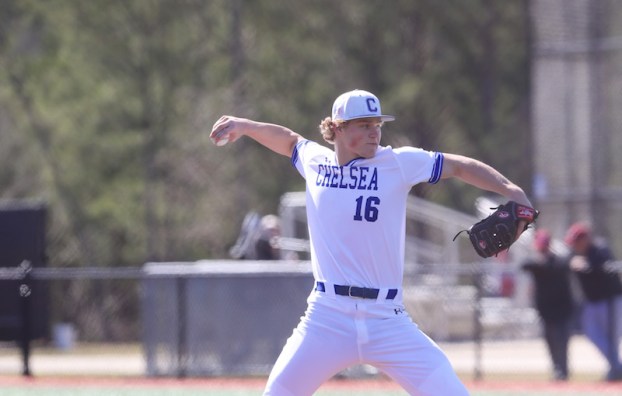 Chelsea’s Carter Frederick, above, continued an impressive start to the 2020 season in wins against Oak Mountain and Brookwood on Feb. 22. (For the Reporter/Cari Dean)

NORTH SHELBY – Following last year’s trip to the Class 6A State Championship series, the Chelsea Hornets are looking to repeat that success in 2020, and through six games, they’re well on their way to another impressive season.

Taking on Oak Mountain and Brookwood on Saturday, Feb. 22, the Hornets picked up their third and fourth wins in a row to improve to 5-1 through the first week of the season against good competition.

The Hornets were able to edge out a good 7A Oak Mountain team 6-3, before then taking down Brookwood 7-1. A recap from each of those wins is below.

After falling behind 3-2 in the bottom of the third against Oak Mountain, Chelsea responded by immediately tying the game in the top of the fourth and posting three in the top of the sixth, while not giving up another run to pick up a 6-3 win.

In possibly their biggest win so far this season, the Hornets got an impressive start on the mound from Connor Ball and a great final three innings from Reid Gongwer.

Ball got the start and pitched a scoreless first two innings, before giving up a three spot in the bottom of the third. But after allowing two quick baserunners in the fourth, he closed his day out with three consecutive outs to finish the game with eight strikeouts and three runs on five hits.

Gongwer the entered in the fourth in a 3-3 game, but he did what he needed to give his team a chance. He pitched the final three innings and allowed just one hit and one walk with no runs and three strikeouts.

That allowed Chelsea the opportunity to be patient at the plate.

Eventually, the Hornets were able to strike on a few mistakes by Oak Mountain in the top of the sixth. Two hit batters, one error and a strikeout in the first four at bats loaded the bases with one out.

That set the stage for Jackson Webster, who laced a double to left field to drive home two runs and put the Hornets on top 5-3.

After an intentional walk, an error on a ground ball from Cole Kennedy allowed one more run to cross the plate to put Chelsea in front 6-3 heading to the bottom of the sixth.

The rest of the game featured just one hit and nine combined outs to close things out quietly.

Webster led the way at the plate with a 2-for-4 performance that featured three RBIs. Jacob Boyle went 2-for-4 as well with an RBI and one walk. Carter Frederick went 0for-1 with three walks, while Adam Reaves, Logan Shores and Kennedy each had a hit.

Early in the game against Brookwood, it looked like the Hornets were going to be locked into a low scoring pitcher’s duel, but seven combined runs between the fourth and sixth innings led to the Hornets picking up an easy 7-1 victory.

Chelsea also didn’t allow a run until the bottom half of the final inning, at which point it was too late for Brookwood. A reason for that strong effort was the combined pitching of Frederick and Hunter Anderson.

Frederick got the start and went 5 1/3 innings allowing just one hit and no runs with 10 strikeouts to pick up the win. Anders closed out the final 1 2/3 innings and gave up one hit and one run, while striking out three batters.

With the strong pitching, Chelsea didn’t have to stress at the plate, and while the Hornets felt out Brookwood’s pitching through the first three innings, they busted into the score column in the fourth.

It all came with two outs in the inning and started when Ball doubled to right field to drive home Frederick, who doubled two batters earlier, for the game’s first run.

Following a walk to Austin Frye, Garrett Frye and Reaves striped back-to-back singles, one to right field and one to left field, to drive home two more runs. The Hornets added one more run on a passed ball that brought home Garrett Frye for a 4-0 lead.

Chelsea added to that lead in the top of the fifth when Webster and Frederick put together a single and double, respectively, to start the inning followed by a walk to Brady Morgan that loaded the bases. A sac fly from Ball drove home one run, but caught stealing and a line out ended what could have been a much more dangerous inning with the Hornets on top 5-0.

After a 1-2-3 inning in the field, Chelsea came back and added its final two insurance runs in the top of the sixth when Kennedy hit an RBI single to third base, followed by an error during a stolen base attempt in Webster’s at bat.

Brookwood added one run in the bottom of the seventh on an error, but couldn’t find any other success in the 7-1 loss.

Frederick finished 2-for-3 with two doubles, while Reaves added a 2-for-3 showing as well. Kennedy, Webster, Frye and Ball all had one hit in the game, while Frye, Reaves, Ball and Kennedy each had at least one RBI.