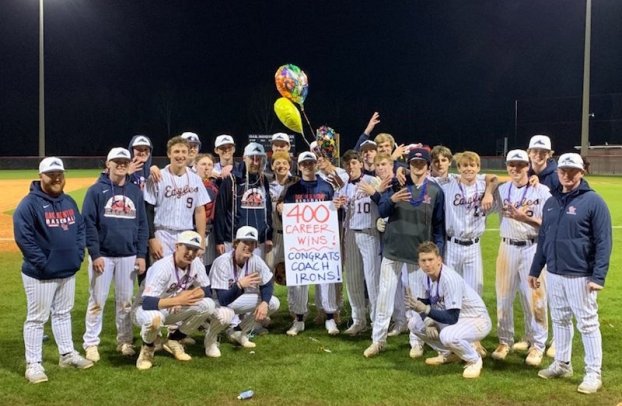 Oak Mountain head coach Derek Irons is surrounded by his team and covered in Silly String after picking up his 400th career win as a head coach. (Contributed)

NORTH SHELBY – After a 2-0 start, the Oak Mountain Eagles lost two games in a row by three runs or less, but on the afternoon of Saturday, Feb. 22, the Eagles bounced back with a historic win.

Looking to get his team to bounce back from the two difficult losses, Oak Mountain head coach Derek Irons got his team fired up, which in turn led to the coach picking up his 400th career win in a dominant 12-2 showing against Brookwood.

The victory came after a 6-5 loss to Mountain Brook two days earlier and a 6-3 loss to Chelsea earlier in the day, and saw the Eagles score seven combined runs in the first three innings and five more in the fourth and fifth to close out the mercy-rule win.

The Eagles also outhit Brookwood 12-1 in the win to pick up the historic win for their head coach.

Stone Evers and Jackson Swarts played a big part in that success. Evers was locked in a zone on the mound, and put together a flawless four innings of action featuring one walk, no hits and 10 strikeouts to help the Eagles take a 10-0 lead on 72 pitches before being relieved by Swarts.

Swarts came in and allowed a hit and one walk with two runs, but also got all three outs in the top of the fifth via strikeout.

Oak Mountain started the scoring in the bottom half of the first behind a walk and an error, which put two runners on with no outs. Then, an error allowed Jake Rivers to cross the plate for the game’s first run, before Cole Sester singled to right field to drive home Mitchell Pierce.

Later in the inning, with two outs on the board, Jake Derecki singled in a full count to drive home Sester, before Andrew Hunt was thrown out trying to add another run.

The Eagles had taken a 3-0 lead, which was already enough with Evers on the mound, but in the bottom of the third, they added four more to that lead.

Following a double from Evers at the plate, an error on a grounder from Stephen Moraski led to both Evers and Hunt, who singled earlier in the inning, to cross the plate.

Now up 5-0, Derecki stepped to the plate and laced a double to right field that drove home Moraski, while an error on a ground ball from Parker Campbell drove home Derecki for a 7-0 advantage at the end of three.

Oak Mountain tacked on two more runs an inning later starting with back-to-back doubles from Davis Gillespie and Sester, the second of which drove home Gillespie.

Later in the inning, following a walk and a single, an error brought home an additional run, while a single from Derecki to right field made it 10-0 heading to the top of the fifth.

Brookwood added its only two runs in the top of the fifth, but Oak Mountain closed out the mercy-rule win in the bottom half of the fifth.

A leadoff single from Pierce followed by a double from Gillespie put two runners in scoring position for Sester, who singled to right field to drive in Pierce.

Then, an error by the catcher during Hunt’s at bat led to Gillespie crossing the plate for the game-winning 12th run.

By ALEC ETHEREDGE | Managing Editor  The Oak Mountain girls soccer team was already off to a soaring start to... read more