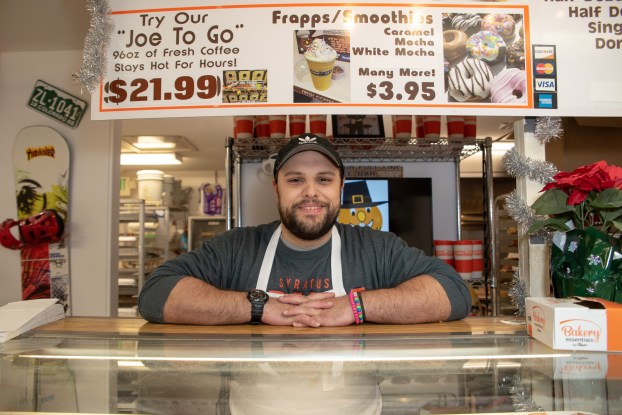 Jose Rodriguez has his hands busy as a train rumbles by the corner of Highway 52 and Lee Street in Pelham. At 3 a.m. he’s an hour into his workday at as he mixes up yeast dough that will transform into Donut Joe’s sugary confections fresh for customers by the time the sun rises—all in all a 3-hour process.

After the dough rises, Rodriguez rolls it out into a flat sheet and cuts out circles that will soon meet the fryer. Over the six years he’s worked there, Jose’s work has gotten increasingly consistent, with all the doughnuts coming out a remarkably similar shape. It’ a key role. If he’s not starting when he does, “everything else is just shot,” general manager Eric Byrd says. But Eric doesn’t worry. Jose’s as reliable as he is consistent—the “backbone of the kitchen,” Eric will tell you.

When the doughnuts are cut out, it’s time for proofing as a humid box activates the yeast to rise again. Meanwhile, Rodriguez mixes up a cake batter for a different variety of doughnut—no rising necessary—and wraps the yeast dough around sausage and cheddar cheese to bake into savory “Smokey Joes” much like a traditional kolache.

Rodriguez’s lone ranger role in the shop ends at 4:30 a.m. That’s when the shop’s chief decorator Osirus Ruiz starts to add icing, sprinkles and candied toppings to glazed doughnuts. Next up Eric enters the scene around 5 a.m. and takes the scrap yeast dough from Jose to make cinnamon twists and, with the addition of cinnamon and apple pie filling, to fry up apple fritters.

By 6 a.m. the shop’s glass cases are full and customers start filing in. The bestsellers—chocolate glazed and maple-frosted topped with pieces of bacon—occupy the most real estate on the top left, and just behind it in popularity are a blueberry cake that’s much like a frosted muffin and an Old Fashioned Sour Cream that tastes like pound cake, both sitting on the bottom right shelf. In between you’ll find options with whatever season of sprinkles is on deck, specialty apple fritters, doughnut holes rolled in sugar, plus classic shapes topped with Fruity Pebbles, coconut, Heath bar, M&Ms—pretty much a whole bake shop of fried cakes with toppings for any set of taste buds. 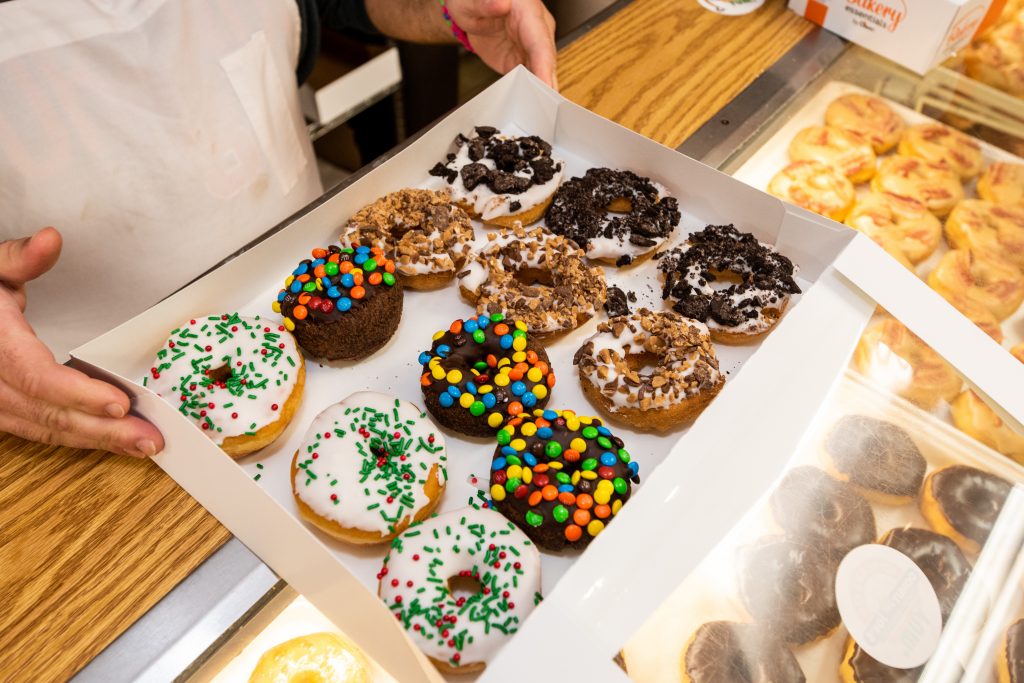 The daily scratch-made process was all started by the shop’s mastermind, Eric’s dad Richard Byrd, who opened Donut Joe’s 10 years ago. “I came in here one day after baseball practice, and (my dad) gave me a glazed doughnut,” Eric recalls. “And I thought, ‘This is the best doughnut I have ever had in my life.” Folks in Pelham, Alabaster, Helena and beyond took note quickly as the shop served up ideas they’d found on the West Coast for flavors like maple bacon and Fruity Pebbles—telling of all the fun varieties to come from the shop for years to come.

The first customer on opening day was a police officer, who radioed some colleagues and before long six police cars were in the parking lot. “It was definitely a God thing because the first day we opened we had people lined up. It’s been that way for 10 years,” Richard says. “That’s not something you can plan.”

Today there’s a steady stream of customers on weekdays, but on Fridays and Saturdays, “We’re running and gunning,” Eric says, with doughnuts frying in extra batches until 8 or 9 a.m. as customers line up out the door at peak times.

And perhaps just as notable at the doughnuts themselves is the shop’s namesake, Joe, as in “a cup of joe.” Donut Joe’s coffees are all roasted locally—with the O’Henry’s brand behind their Southern Pecan and Jamaican Me Crazy flavors and Royal Cup behind their House Blend.

Although he spent a few years in Troy earning a business degree, Eric, a 2010 Thompson High School graduate, has been managing the shop’s day-to-day operations ever since, while Richard works behind the scenes on branding, social media and other business operations. Any piece of marketing or branding in the shop was designed and printed by Richard too—with a look so professional that people often ask if Donut Joe’s is a chain when in reality it’s a single-shop family business. Richard’s artistic knack comes from his mom, painter Joyce Byrd, who worked at the shop its first few years and captured it in a painting that now hangs on the far left wall of the storefront.

Throughout the shop you’ll find a Donut Joe character with his signature orange and green brand everywhere from signs to a figure parachuting in on the ceiling of the shop. After all, branding is so key to how Richard—an entrepreneur who previously ran a power equipment shop, a bike shop, a sign business and a hunting gear business—does business that he had all of it completed before he ever fried a doughnut. Back in the shop, look closer beyond their vintage sign collection and you’ll find more markers of the Byrd family too. 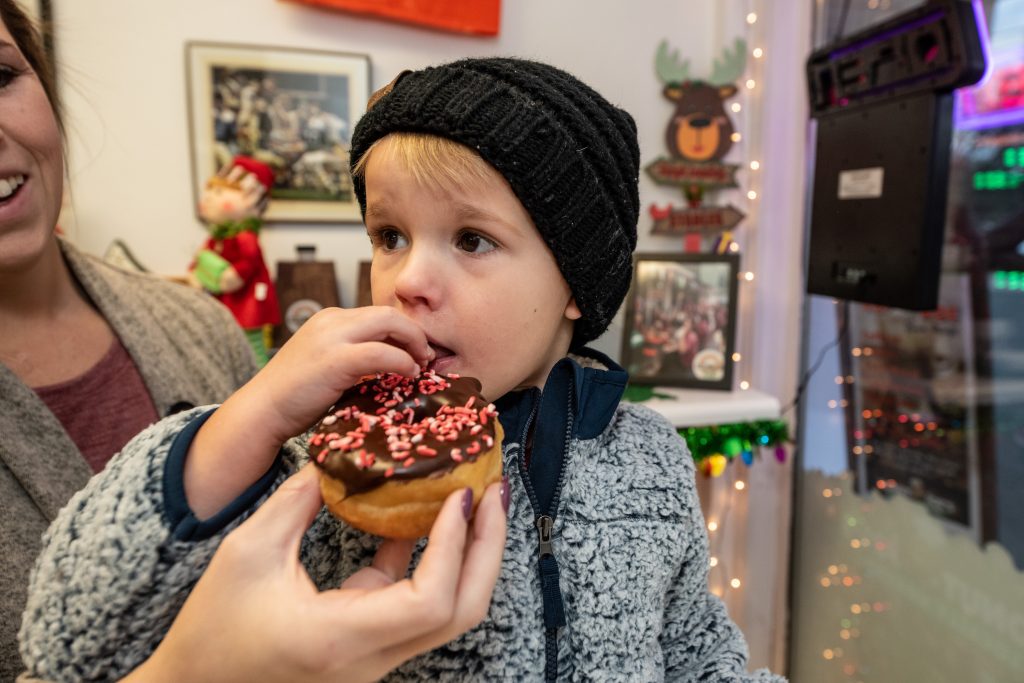 Behind the cash register sits a snowboard—fittingly coordinating with Donut Joe’s colors—that Richard bought in Colorado not far from a license plate from the Centennial State on the wall. After all, the Rocky Mountains are their favorite family vacation destination, and you’ll likely find Eric wearing an Estes Park hat too. Just to the right of Joyce’s painting is a Red Hot Chili Peppers poster with Donut Joe’s logo onto it. Customers sometimes ask how they got the band to make them a Donut Joe’s poster, but the true story is Richard just personalized an existing Red Hot Chili Peppers poster since he and Eric are such big fans.

Speaking of fans, off in the right corner of the shop hangs a BCS National Championship sign the father and son picked up in Pasadena in 2010 as they watched the Crimson Tide take the national title. To its right sits a University of Alabama print signed by one of their regulars, Thomas Rayam, a former offensive lineman who now coaches at Thompson High School.

And for holidays, “We do it up big,” Eric says. With the seasonal sprinkles for Halloween or Christmas or Easter comes décor into the shop too, with a sprinkling of faux autumn leaves and a skeleton in the fall. Come February they bring on the red and pink for their second busiest day of the year, Valentine’s Day—bested only by decorate National Doughnut Day on the first Friday in June. In the fall they ice a pumpkin spice cake doughnut with cream cheese frosting, and in the spring they top an Easter egg doughnut with bright colors. “We always try to change it up and keep things interesting,” Eric says.

What might even loyal customers not know about though? The seasonal Caramel Apple doughnut, filled with apple pie filling and topped with caramel icing, is “top shelf kind of good,” Eric will tell you. Since February of last year, they’ve also been serving up lattes, cappuccinos, espresso shots, and cold brew from their espresso machine—and hot chocolate too.

Donut Joe’s is also perfecting the art of customer orders. Want a “prom-posal” doughnut? You can order that in advance. What about an outer space theme or footballs and baseballs? They’ve got that covered too. “We can get pretty creative,” Eric says.

And it’s not just locals taking note. Often when summer traffic backs up on I-65, travelers, many on their way to the beach, will detour and stop for a sweet treat. For one family, it’s part of their game day routine en route to Florida State University to stop for Donut Joe’s. No matter where they come from, often the staff knows a customer’s orders before they even walk in. “I like to meet as many people as possible and learn a lot of people’s names so when they are walking in it is like they are coming in to see a friend and get a coffee and doughnut at the same time,” Eric says. 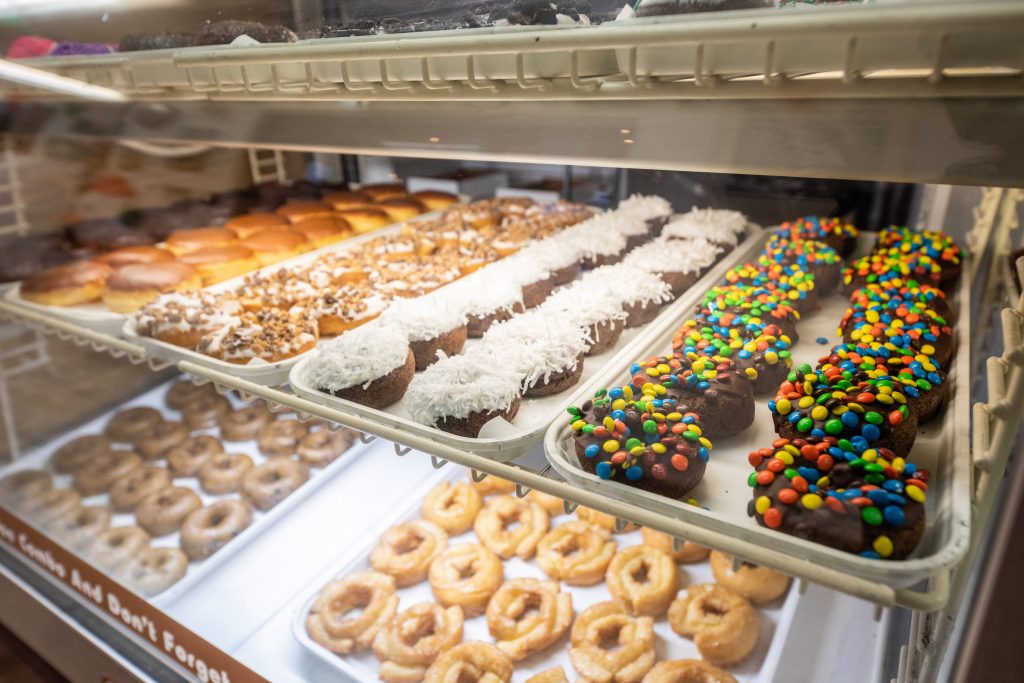 Imagine you are asleep with a resting heart rate of about 40 beats per minute, and in less than five... read more