A day that started at 7 a.m. on Tuesday with the Jaguars’ early morning practice has now trickled into the wee hours of Wednesday. “It’s harder for me to overcome the losses,” he says.

After finally calling it quits, the coach of 24 years drags himself home and into bed. Chase gets three hours of sleep before making his way back to the site of the previous night’s four-point loss for Spain Park’s next 7 a.m. practice.

Donning a blue hoodie, grey sweatpants and black sneakers, Chase crouches near the midcourt line to plug in the scoreboard operating machine. At 6:30 a.m., the sun has just risen and peeks through the glass doors above Spain Park’s gym. Chase is one of the first in the building ahead of his team’s practice.

Despite the lack of sleep, he’s got his glasses back up on his forehead. He’s alert and on the tips of his toes pacing back-and-forth as he explains his morning. Admittedly, he says six hours is about the best he can get sleep wise. “It all depends on if we win or lose,” he says before letting out a chuckle knowing what had just happened against Madison Academy.

Having lived and breathed basketball his entire life, the sport revitalizes Chase more than anything. Drawing up practice plans and game plans for games that won’t take place until January so that his team is prepared for every team and every situation isn’t just his job, but his passion.

“I’ve coached every team my kids have ever been on, I coach AAU and this is my 24th varsity team this year,” he says. “It’s all been different, and I think I’m getting softer the older I get. But I have high expectations for myself and my players. Right now, my players have trust in me, so it’s easy and I love it. I’ve found my niche and I’m not giving that up.” 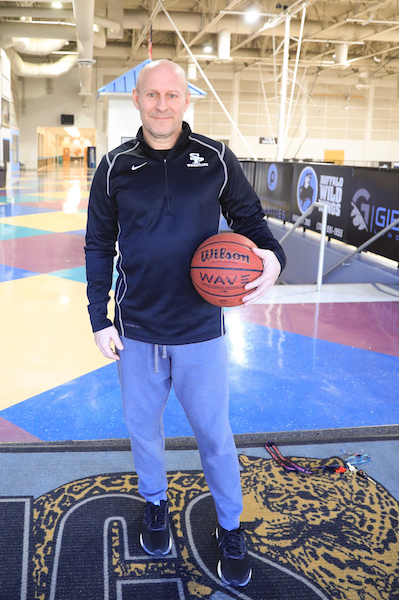 His appetite to be the best for his team shows in his preparation. Chase doesn’t go into practice with a blind eye, he goes into it with a plan because of his preparation and film study into the wee hours of the morning when his team needs improvement.

Looking back over the film a day after he originally was stuck in his office until 1:30 a.m., Chase pulls it back up and sets the offensive plays to roll through. “Let’s take a look at our first offensive possession against Madison Academy,” he says.

After fast forwarding, he sees the first mistake, “Look, right there, do you see that?” he asks before explaining a play where star senior Sarah Ashlee Barker missed a proper read. “SA is a four-year starter. She’s going to the University of Georgia and is one of the best high school players around, but this is her first year running the point as the primary ball-handler,” Chase says. “When she’s bringing the ball up the floor, we’re trying to get her to read the defense and know her reads before it even happens.”

He explains the proper read, and before the clip of the first offensive possession of the game is done, he finds two more mistakes that need to be fixed. It’s going to be an intense practice.

Just before it starts, Chase wheels out a ball cage full of Wilson Wave basketballs and stops it at midcourt right next to the scoreboard operating machine he had just set up. “The clock is set for 15 minutes, they’ll keep an eye on that and every one of them will be down ready to go before then,” he says.

As the clock dips inside of five minutes and the time nears 7 a.m., players start filing down the stairs at the far end of the court and through the double doors leading onto the court. Each walks over to the ball cage to grab one of the balls and get a few shots in before the rigorous practice begins.

Barker, who was injured with cramps in the opener a week earlier, says the early-morning practices aren’t bad. “I love it!” she says. “It’s tough at first, but once you get used to it, it’s so much better.”

But on this specific day, coming off a loss, it won’t be a fun, cheery practice. It will be one that sees Chase on his team throughout and the players trying to fix mistakes.

Right off the bat at 7:05 a.m., Chase jumps right in with a drill in which he squat into defensive position to show his players how to dribble with a more physical edge without turning the ball over.

Now pacing back and forth across the giant SP logo on the middle of the court, the team shifts into a drill that brings three groups of three players together to try to make the most 3-pointers in a competition. The goal is to help the team get in a rhythm after struggling to hit threes in their previous outing.

But once they transfer into a different instruction with three defenders and three offensive players around the arc, the Jags get no more than three passes before trying to find an open shot. Throughout the 15 minutes of doing that, only one three is made.

“I need 55 points a game,” Chase says bluntly. “I need 25 from (Sara Ashlee), I need 20 from the rest of my guards and I need 10 from my post players. We have to make shots under pressure. You can’t win if you don’t make shots. Your energy today, honestly, isn’t very good. We have someone here watching our practice today, and if I were him, I’d say y’all are practicing like crap.”

From that point forward, Chase hammers away at the team for rest of the practice, harping on what to do in different screen situations, getting offensive rebounds, having shots blocked, lack of effort and playing to the level of competition.

While Barker starts to be more vocal as a mediator the rest of practice, she too is getting frustrated. At one point, Chase can’t handle what he is seeing when his varsity team was scrimmaging against the junior varsity team.

Squatting down between the 3-point line and the SP logo, Chase has his head in his hands as he shakes back and forth. “Stop, stop, stop!” he says. “You guys are playing to the level of your competition right now. There is a reason we are sucking right now and it’s because you can’t, no offense JV, even put the ball in the basket against the JV team.”

The rest of practice, his team shows some urgency and starts to find a rhythm. Chase will note this afterward, but he isn’t going to pass up the opportunity to ride them and give them some adversity to face.

“You got to see them at their worst today,” Chase says after practice. “It wasn’t as good as it needed to be. Once we started struggling a little bit, we couldn’t get out of our own way. They got a little better near the end, but today was a good chance for them to face adversity. In tough practices like today, we only have one senior leader in SA, and it’s easy for her to get frustrated sometimes. So these days are a good chance for everyone to learn.”

And the only reason Chase feels comfortable enough to use the choice words he uses and to not be relentless with them is because the trust his players have in him and the trust he has in them.

“I can coach them that way because they trust me,” Chase says. “Used to, I couldn’t get on them. I couldn’t teach them. But with this group, I get to coach because they handle it the right way and the parents trust me with their kids. Everyone knows if I get on them, it’s not on one specific player, it’s the entire group.”

And while he’s hard on his players on the court, he describes it as business. Off the court, however, he likes to say “contrary to popular belief, I think I’m a pretty fun guy to be around.”

A dad on and off the court

Camille Chase sits crouched down at the free throw line of one of the side goals in Spain Park’s gymnasium looking on as her dad barks out orders to her teammates. At one point, her dad looks over after hopping up to explain a missed opportunity off a spring by another guard. “Isn’t that right Camille?” he asks.

As the daughter of the head coach and a sophomore on the team, Chase is in an unusual role, but one she takes advantage of as a starting guard for the Jaguars.

Born when her dad was 35 years old, she is now 15 and has been both parented and coached by her father for close to that same amount of time.

“I’ve never really experienced any other type of style,” Camille says. “I know what his expectations are, I know how he’s going to coach, I know what he’s going to say when he’s yelling at us and when I see something on the court, I know exactly how he is going to react. I want to say I should predict what I should do, but I’m not quite there yet.”

But Camille cherishes that relationship. With a smile on her face despite sitting out practice, she turns to her dad with a smile. “I think we’re closer because of that,” she says. “It’s a part of our relationship. Him coaching me and being a dad to me are two different things.”

Chase admitted he used to not separate his job from his home life very well, but with Camille and his son Parker, who is in eighth grade, he’s done a better job of leaving basketball talk to when he is at work for the most part.

“I try not to ride them too hard after a game in the car or when we get home,” Chase says. “Everybody else, they get in the car and they go home away from me. We’re going to make corrections and do stuff the next day, so I just wait until then.”

But that doesn’t stop him from being just as hard or harder on her. The third of the mistakes on that first offensive possession in the film from the Madison Academy game was one from Camille.

And that next morning at practice, that mistake is turned into relentless work and that relentless work every morning turns into success in each game, making Chase one of the best at getting the most out of his team each of his 24 years as a head coach.