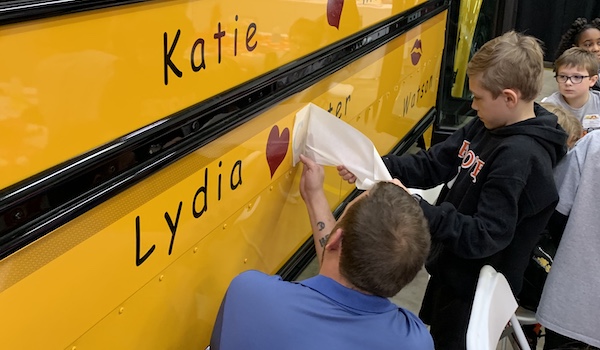 Students of Brock’s Gap Intermediate School in Hoover enjoyed a special lunch and the privilege of putting their names on Transportation Souths latest bus model. (Contributed)

Transportation South in Pelham hosted its 11th annual Love the Bus Luncheon to honor bus drivers all over the state on Feb. 13.

Taking advantage of the opportunity to use Valentine’s Day as a theme to show love to those who transport children each year, this bus manufacturer invites not only the best and most invested bus drivers to a barbecue lunch every year, but also one special class from somewhere in the state.
There are about 16,000 school bus drivers in Alabama transporting 375,000 students to their place of education each day.

Each of those busses replaces 36 cars and saves 2.3 billion gallons of fuel annually.

Each of those drivers has his or her own story, and makes a difference in countless children’s lives.

“The biggest strength or weakness in any organization is its people,” said Chad Carpenter, Alabama’s director of pupil transportation.

He went on to personally thank the attendees of the luncheon for their hard work and dedication within each of their counties.

Finally, nominees for bus driver of the year were recognized and cheered on by their home district as they approached the stage and received a certificate of recognition and gift from Transportation South.

At the end of the ceremony, Michelle Hogan was recognized as the Alabama Bus Driver of the Year for her years of work as a bus driver and her hard work as a cancer activist in her community. She and her colleagues on stage were nominated within their districts and counties for the service they give to their communities in countless ways.

As Transportation South also revealed the new bus models for 2020, one other group was introduced as special guests.

Gina Borgosz’s third-grade class traveled in from Brock’s Gap Intermediate School in Hoover. The students enjoyed pizza and had the privilege of placing their names on the 2020 model bus that will be traveling across the state to show off Transportation South’s newest bus line.

“I’m thrilled to work for a company that honors people like bus drivers,” Cathy Stags with Transportation South said. “It’s a pleasure to put on an event just for them, and spotlight the differences they make in their individual communities. It absolutely thrills me.”
From leading the fight against cancer to organizing food drives to raising funds for countless noble and important causes, the 20-plus bus drivers honored at this luncheon were a bright spot on an otherwise rainy afternoon.