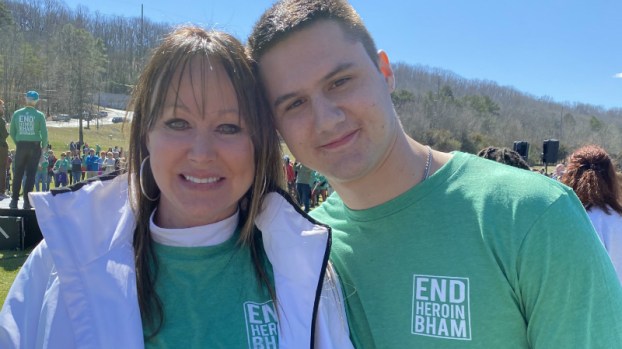 HOOVER – With a new day, a new venue and a message that tomorrow can be a new start, the Fourth Annual End Heroin Walk Birmingham drew record crowds to Veterans Park in Hoover on Saturday, Feb. 29.

After a soggy month, the last day of February boasted a picture-perfect sky, and while a bit chilly with a slight breeze, it was a beautiful day to be outside.

Mike Vest, executive director of the Addiction Prevention Coalition, welcomed a record number of participants to the annual event designed to promote awareness about opioid and other forms of addiction.

“We are grateful to Mayor (Frank) Brocato for his assistance in making this location possible. Thank you to the city of Hoover,” said Vest.

As with any large event of this nature, there were multiple sponsors that helped make it happen, and the team at the APC went the extra mile in showing their gratitude with signage, and acknowledgements on print and electronic communications. The noticeable contribution to the average observer, however, was the number of volunteers there to work the event—and the compassionate energy with which they served.

The day generated a range of emotions which is totally expected given its goal since its inception in 2017.

Alabama is not alone in having communities ravaged by heroin, opioids and other drugs. The APC promotes this event not only as awareness but as a day to remember those we have lost, to celebrate sobriety and to give hope to those in recovery.

It was a day of testimonies, encouragement, and countless tables around the park with resources and people available to offer insights, educational information and other tools to help families and individuals know they are not alone and there are resources available.

One of the most poignant moments of the day was when prior to the Walk starting Diane Flowers took the stage to talk about the PALS Program (Parents of Addicted Loved Ones). She described APC as the resource organization that made her aware of this program that has provided her support as her son was addicted to heroin and in rehab out of state.

Her testimony took courage and while nervous and visibly shaking, she pushed through her statement, making sure the audience knew her son had given her permission to talk about him. Completely unaware that her son, six months sober, was sneaking up behind her, she concluded her speech with the audience still clueless as to what was transpiring.

Then, emcee Rob Conrad asked Flowers to turn around. Her son Weston, bouquet of flowers in hand, embraced his mother as tears streamed down the faces of everyone, men and women alike.

Proceeds for the Walk will be used to help provide scholarships for substance use disorder treatment locally and maintain prevention programs in schools and communities.

The APC is committed to removing the sigma surrounding SUD according to Carie Wimberly, operations manager for the organization.

“We are about building bridges between those in need and the resources available to help them,” said Wimberly.