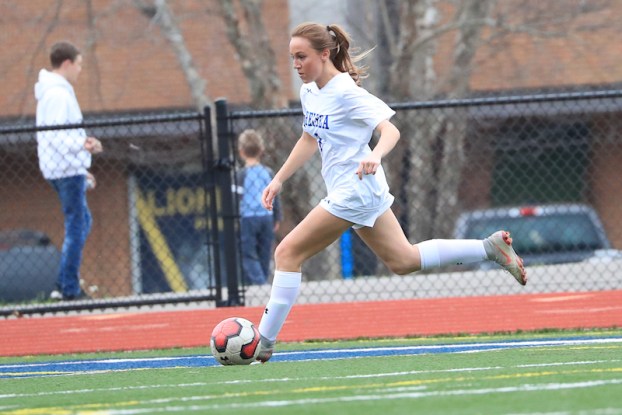 Chelsea’s Kailey Littleford, above, picked up a hat trick against undefeated Pelham to not only lead the Hornets to an area win, but also set a new career record for most goals scored by a Chelsea player. (For the Reporter/Dawn Harrison)

PELHAM – It was a big night on several fronts for the Chelsea girls soccer team on Thursday, March 5. Not only were the Hornets taking on an undefeated Pelham team in area play, but it marked a historic night for one of their leaders.

A week after Chelsea head coach Jonathan Hammett picked up his 200th career win, senior forward Kailey Littleford joined the coach in setting a historic mark of her own.

Littleford broke the all-time scoring record held by former player Britne Holderby. During her career, Holderby scored the game-winning goal for Chelsea’s first championship team back in 2012 and was named the county’s Player of the Year two years later as a senior.

Now, Littleford has etched her name in the history books. Not only did the senior pass Holderby to become Chelsea’s best scorer in school history, but she did so with a hat trick, which has become the usual.

Heading into the matchup with Pelham, the Hornets had won two games in row and three of four, but they were taking on a Panthers’ team that had gotten off to an 11-0 start.

Not only that, the Panthers had pitched eight shutouts in their first 11 games, including four in a row, and hadn’t given up more than a goal in any game, while the offense had scored a combined 58 goals, including 10 in two of their last three games.

Chelsea, however, had taken on elite teams early in the season, including 7A powerhouse Oak Mountain on two different occasions.

While both teams entered with confidence, the Hornets didn’t shy away from the challenge of handing Pelham its first loss of the season.

And a big reason why was Littleford.

Taking on the Panthers’ difficult defense, she was on throughout the night and went on to score three of her team’s five goals in the win, while her teammates were also strong on both ends of the field not only moving the ball offensively, but keeping Pelham’s offense in check other than one goal.

Littleford now has 86 goals for the Hornets in her career, and the senior still has half a season and the playoffs to extend her goal total, which could easily exceed 100.

With the 5-1 victory for the Hornets, they not only won their third game in a row and fourth in their last five to improve to 5-2-1 on the season, but they picked up their first area win to start area play 1-0.

Pelham is now 11-1 on the season, and looks to be a strong contender for a playoff spot, as the Panthers continue to show drastic improvement that started in 2018.