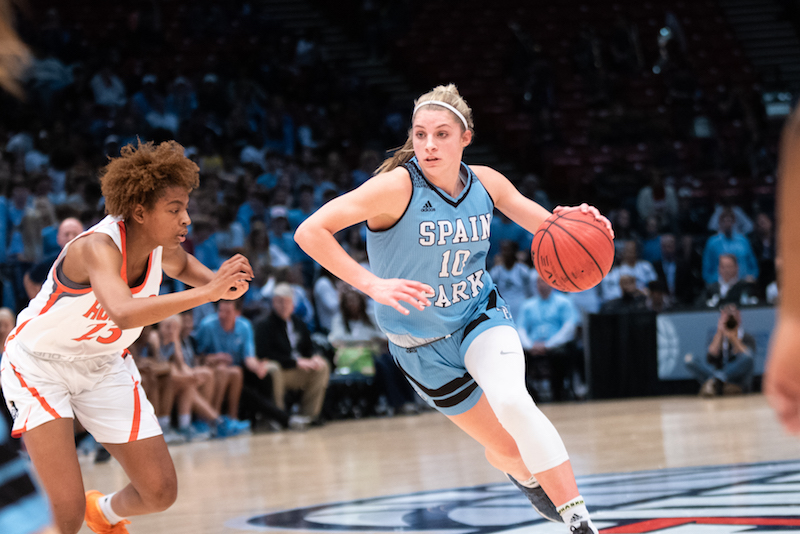 HOOVER – Now that her historic career has come to an end with a second state championship in three years, postseason awards will start rolling in for Spain Park senior Sarah Ashlee Barker, the first of which was being named Alabama’s girls basketball Gatorade Player of the Year on Friday, March 6.

Less than a week removed from helping the Jaguars win their second championship in two years by taking down crosstown rival Hoover 47-44, Barker became the first Spain Park player to win the prestigious honor.

The award, which recognizes not only outstanding athletic excellence, but also high standards of academic achievement and exemplary character demonstrated on and off the court, distinguishes Barker as Alabama’s best high school girls basketball player.

In addition to being the state’s best player, she is now also a finalist for the prestigious Gatorade National Girls Basketball Player of the Year award to be announced later in March.

During the run to the state championship, the 6-foot senior athlete led Spain Park to a 32-4 overall record, while averaging a double-double at 23.3 points and 10 rebounds per game.

As a part of Gatorade’s cause marketing platform “Play it Forward,” Barker also has the opportunity to award a $1,000 grant to a local or national youth sports organization of her choosing. She is also eligible to submit an essay to win one of twelve $10,000 spotlight grants for the organization of choice, which will be announced throughout the year.

Barker, who has maintained a 3.31 GPA in the classroom, has signed a national letter of intent to play basketball on scholarship at the University of Georgia this fall.