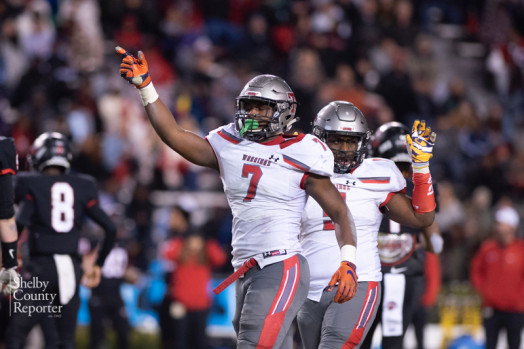 The nation’s No. 9 ranked football player made his college commitment on Monday, March 9, with an announcement on Twitter.

Jeremiah Alexander, a Thompson linebacker and the state’s top player for the Class of 2022, chose to commit to the Alabama Crimson Tide after taking recent visits to Tuscaloosa and Athens, Georgia to see the campus of the University of Georgia.

But after his most recent visit to Tuscaloosa with head coach Nick Saban, Alexander said it felt like home to he and his family, which led to the March 9 commitment.

While he’s still a rising junior with two years left to play, Alexander has said multiple times he wanted to get this decision out of the way so he didn’t have to worry about it over the next two years.

Instead, he wants to focus on continuing to improve his game to make sure he’s helping the Thompson Warriors continue to chase state championships, while also improving his game for the next level of play, which is a scary thought.

Just a sophomore, Alexander already stands at 6-foot-2, 222 pounds, and is a muscular presence that made his impact felt quickly at the defensive end/outside linebacker position during his freshman and sophomore seasons with the Warriors.

He now has a total of 41 tackles for loss and 15 sacks in his first two seasons, while totaling 192 tackles.

Alexander has also been named to the All-County First Team and was a finalist for the state’s Class 7A Player of the Year award as a sophomore. According to 247Sports, he’s the No. 9 overall prospect in the country for 2022 and the second best outside linebacker/defensive end combo in the country, while being the state’s top prospect.